I’ll bet most of you don’t do errands with kangaroos much.  Pity.  When you grocery shop with a kangaroo it makes everyone smile and the whole experience is more amusing than it has any right to be.  Sometimes I have three kangaroos along.  Sometimes just a big one.  Sometimes a teeny one.  But most often it’s the middle sized one, and this week that one went to choir.

Both of my daughters are members of the Milwaukee Children’s Choir.  They love it.  They have beautiul little voices and choir is fun and it meets every Tuesday night.  Last week Mona asked if she could go in her kangaroo costume.  I made that thing two Halloweens ago and I’m amazed it’s still holding together.  Mona likes to lounge around in it at home and I don’t care if she wants to wear it when we go out, but she’d never worn it to choir before.  I asked her if she was sure, and she was, so off we went.

But when we got there, in Mona’s words, “Everyone’s embarrassed of me.”  All the kids in the choir were so delighted that Mona was a kangaroo and everyone wanted to sit next to her, but it made her too self-conscious to participate.  She sat on my lap or on the floor for the whole hour, and despite both the efforts of her sister and the kind words of the teacher, Mona wouldn’t join in the singing.

One of the most interesting things about Mona is that she does wonderfully eccentric things and has great dramatic flair, but it’s private.  In any other kid her behavior would look like an attempt to get attention.  Her tastes lean toward the extravagant, but it has nothing to do with what other people think.  It’s all for her own entertainment, and if anyone takes notice she withdraws.

As she’s gotten older (if you can think of the ripe old age of six as ‘older’) she’s become more worried about what other people think.  I don’t want that to affect her creativity, but I understand it.  I don’t like being the center of attention either, so I don’t push anything.  I just want her to be comfortable with who she is, and if who she is is sometimes shy, that’s fine, but it’s hard to watch your child miss out on something he or she would enjoy without a good reason.  I felt bad that Mona missed out on that choir class.

Many months ago Mona asked me what she should do if people ever laughed at her.  I thought about it a moment, and decided the best response would be to give them a haughty look and say, “Jealous?”  She liked that, and we practiced it by her walking into the room and I would point and laugh, and then she would say, “Jealous?!?” with a big smile, and I would look dumbfounded which cracked her up.  By the next day she couldn’t quite remember it, so when I laughed at her she said, “Nervous?” which I actually like even better.  (I mean, really, if you were trying to put someone down and he or she said, “Nervous?” wouldn’t you suddenly be nervous?  How great is that?)

In any case, we talked about how she should have reacted at choir rather than missing out on a nice time.  I didn’t make her go sing because I appreciated that she was embarrassed, but I pointed out that everyone loved her as a kangaroo.  That nobody was mean about it, or upset.  There was no reason to say to anyone ‘jealous?’ or ‘nervous?’ or anything.  It was all good.

Well, that must have sunk in, because this week she asked again if she could please wear her kangaroo costume to choir.

So I made her bring along a change of clothes this time just to be safe, and off we went.  Maybe she just needed a week to mentally prepare, but this time she was completely comfortable.  Everyone was thrilled the kangaroo was back and Mona sang and participated in all the games and had a lovely time.

On the way out of the building (with Quinn sound asleep in his own kangaroo costume weighing a ton in my arms), I asked Mona how it went.  She said, “It was great.  But no one asked for my autograph.”

I love that crazy kangaroo. 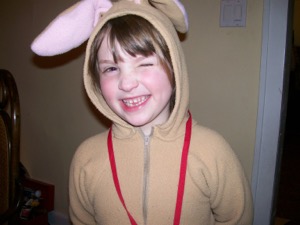 Posted by Korinthia at 8:38 AM