I’ve been informed by a good friend that I’m one of THOSE moms.  She meant it nicely but with an eye roll.

I make my kids’ Halloween costumes.  They can be anything they want and I will buy fabric and make it.  Last year they all wanted to be kangaroos (the allure being you could trick-or-treat with the pouch), which was great because I just needed one bolt of brown fleece and I was set. 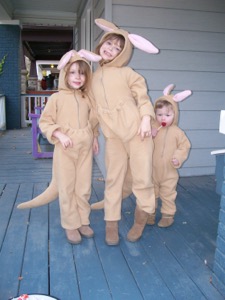 The truth is, if I could just sit and make stuff–out of paper, out of fabric, out of wood–that’s all I would do.  I love being able to take some image in my head and see if I can create it in front of me.  But there is no room in this world (let alone my house with no closets) for the gazillion things I would like to make, so I have to keep my creative impulses in check much of the time.  Often I channel my ideas into things that will be consumed (like fun looking birthday cakes) or that will be sold or given to someone else to store (like my instruments).

Halloween is like a license to make stuff while also making my kids happy, so it’s a win all around.


Now, I need to point out that I don’t really sew.  Not really.  My mom can sew.  She used to make us real clothes when I was a kid and some of my earliest memories are of her with patterns laid out on the basement floor and her carefully cutting along dotted lines pinned to fabric while the cat got in the way.  I can’t follow a pattern.  I’m bad with other people’s instructions because if it isn’t how I would do it, and if I can’t wrap my mind around it, then I can’t make myself trust it.  So I just make stuff up.  If anyone who sewed got up close to any of my kids’ costumes they’d probably shudder the same way I do when I’m confronted with an amateur’s free-for-all version of violin repair, but I figure the costumes are not being saved for posterity–they just have to survive one good day.  But it’s fun and I love the challenge.

During the last deployment I was too pregnant to do much sewing.  Luckily, Mona had no interest in having a costume and just handed out candy, and Aden wanted to be a bat and I was able to buy her wings and just make her hood.  This year we went fabric shopping while Ian was still in town to help, and I got started sewing early to make sure they would be done in time.

My challenges for this year:  Quinn wanted to be a purple cat, Mona a swan, and Aden a grey horse from Webkinz world.

I tackled the cat first because it was the simplest, except for the fabric Quinn picked out.  It wasn’t just fuzzy and purple, it was that loose fuzzy stuff that gets onto everything.  I ran the fabric through the wash several times to de-fuzz it enough to use.  The first time I went to get it out of the dryer it looked like a muppet had exploded in there.  The entire door and inside of the dryer was covered with purple fluff.  I had to scrape the inside of the dryer twice before it stopped turning purple after running that fabric in it.  I kept telling my son that if the fabric stayed messy we’d have to go find something different, but he just kept telling me how much he wanted this purple fuzzy stuff, so I kept playing with it.  When the purple menace stopped shedding I went ahead and started cutting.  For some reason Quinn objects to having ears, but I told him he could wear the hood down and he was okay with that.  Here’s the purple cat: 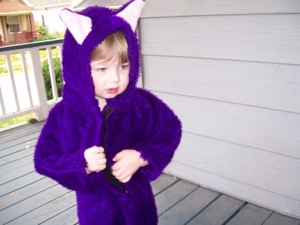 Next I worked on the horse.  Aden is very particular, so I tried to leave certain details to her.  She made her tail out of yarn, and I used velcro to attach it so we can take it off if we need to wash the costume.  She did the spots herself with fabric paint because I knew I wouldn’t do it ‘right.’  I think it came out okay, but if I ever make a horse again I’ll go at it a little differently.  Here’s Aden doing her spots and the finished horse: 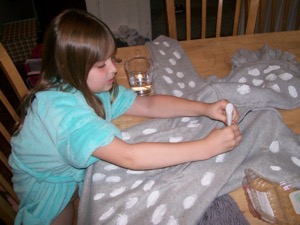 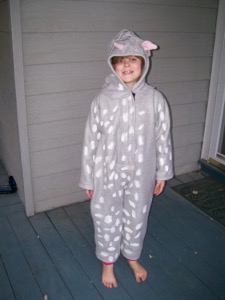 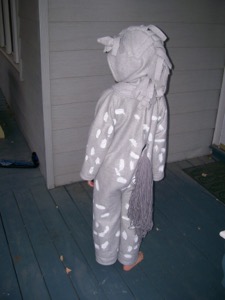 The big challenge, of course, was the swan.  I had to make the wings detachable because I know Mona will be wearing her wings at every possible opportunity for the foreseeable future, and she won’t want to put on the entire swan getup just to flap around.  Mona was very frustrated that I saved her costume for last, but I had to think about it.

I didn’t want people to mistake her for a duck, so we made her a trumpeter swan because its legs and bill are black (so less duck-like), and we got her a toy trumpet to wear around her neck to help provide another clue.  It’s tied on with a feather boa simply because she really really really wanted a feather boa.  Her costume is all in parts.  She’s wearing black leggings, a turtleneck shirt that I altered, a detachable hood with the head, wings that strap over her arms, and the trumpet.  It’s a lot to keep track of so I hope we can find all of it when Halloween finally gets here.  I figured making her a head on top of her head would add a teeny bit more height and make her more swan-like.  I’m not completely happy with it, but Mona is too fidgety for me to keep fussing with it.  Every time I had her put the hood on and tried to adjust something she’d say, “It’s fine!  It’s fine!”  If she’s happy with it that ultimately makes it good enough.  My daughter the swan: 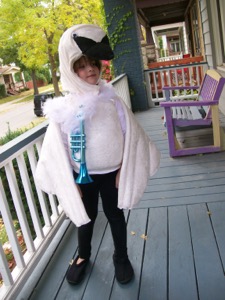 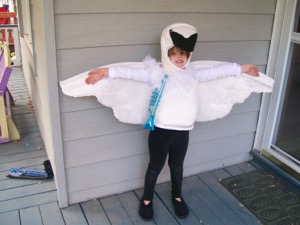 So there we are.   Now I just need to find a volunteer to help man our candy bowl for a bit while I walk my kids around for trick-or-treat!  On an average year we go through well over a dozen large bags of candy so it’s not a small job.  I think one of our neighbors counted one year and determined we get between 400 and 500 kids.  I have no idea why, but it’s fun!  Can’t wait. 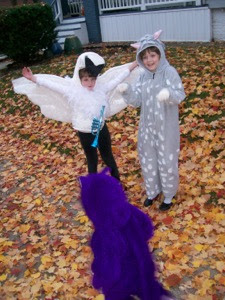 Posted by Korinthia at 3:52 PM