The goodbye at the airport was hard.  I cried.  I hadn’t expected to cry, which is ridiculous because I cry at everything.  (Whenever I try to appear tough Ian reminds me of movies where I was weeping before the opening credits were done rolling.)

The whole trip to Madison felt unreal.  I picked the girls up from school, stopped at home just long enough for a potty break and for the kids to grab any blankets or toys they wanted to sleep with, and we headed west.  All three kids wanted to cram together in the back of the minivan to watch a DVD, which worked out well since Ian had asked me to bring a ginormous army box from the basement that filled up the middle row of seats.  I couldn’t really see my kids.  I drove for ninety minutes with only the GPS to talk to and incredibly depressing news about the war on the radio.

We arrived in time for dinner.  That was fun.  Ella’s Deli is this crazy place to eat in Madison with a carousel outside and hundreds of moving toys on the ceiling.  Our table was one of those games with iron filings under glass that you can drag a magnet over and put beards or hair on the people drawn underneath.  The kids were thrilled with dragging the magnet all over the table and there’s no better place for an ‘eye spy’ game than Ella’s.  We took the kids out to ride the carousel while our food was being made, even though it was incredibly windy and cold outsdie.  It was nice to all be together.

Things didn’t go so well once we were back in the hotel.  The big plan was for the kids to play with Ian in the pool while I caught a little break by taking a hot bath.  Unfortunately, the bathing suits I’d set out for the girls never made it into my suitcase, so we had to improvise.  I told them I didn’t see any reason they couldn’t try to swim in their clothes, since they just had on simple shirts and leggings, and frankly they don’t really swim so it’s not like clothes would slow them down.  The pool was teeny, and they were just going to bounce around.  Aden balked, but Mona was up for creative solutions.  She ended up in my suit–which was hilarious.  I cinched it up as tightly as I could manage but she still looked as if she were wearing a flowery sack.  Mona topped off the look with her froggy scuba mask and was ready to go.

For Aden, however, this was the last straw.  She’d been on a hair trigger for days about her dad leaving, so with a good excuse to cry she let loose.  Ian took Quinn and Mona to the pool and I tried to talk to Aden.  She was a mess.  I apologized again and again about forgetting her suit, and I tried to convince her that it was better to find ways to have fun than to choose to be sad.  But she was done.  I set her up with the nebulizer (we weren’t making the mistake of leaving that behind again) and I took my bath.

When I came out, she was calmer and playing with some of her toys.  I told her again I was sorry about the suit and this time she said, “It’s okay.  Everyone makes mistakes.”  Then she started to cry again.  I asked her if there was anything that would help, and she decided she wanted to talk with one of her friends.  It was only about 8:30, so I went ahead and dialed the number.  The friend’s mom was sympathetic and tried to wake her daughter up to talk to Aden, but she was too far into dreamland to be coaxed into a phone conversation.  Aden talked to her friend’s mom instead, and it helped.  Aden doesn’t have any friends who really understand what she’s going through, but I’m grateful that so many of them try.

Mona and Quinn came back from the pool happy, and Aden finally decided she wanted to go, too, even if it meant wearing my suit like Mona had.  Ian really didn’t want to go back to the pool.  I know he wanted time with me, but there’s just no way to relax together with all the kids in the same room, so it made more sense for him to concentrate on them.  He agreed to go with Aden to the pool and she lit up.  It was nice to see after such a difficult evening.  I know Ian enjoyed that last bit of playtime with all of his kids.

Then we suffered a very long night.  Quinn was fussy and would only rest next to me.  Once he fell asleep and we moved him to the other bed, he started to cough and thrash and bump into Aden.   Aden kept having to shift around.  Mona fell off her side of the bed at three in the morning and howled.  She ended up in the middle of our bed next to me until I decided I had to move next to Quinn to keep him still, and Aden ended up at my feet somehow.  By the time we got up at five I was wiped out.  We nebulized all the kids, packed up, grabbed a little breakfast in the lobby (which had a do-it-yourself waffle station–pretty cool) and headed to the airport.

It was nice to see the other people in Ian’s group.  When he was working with the unit in Texas last time, I never met anyone or got to be there for any of the sendoffs or welcomes home.  (I think that must have been very lonely to arrive back from Iraq and see everyone else get to hug their families when they got off the plane.  I hate that no one was there to greet Ian.  I’m already looking forward to welcoming him back next year.)  There are eight people in his group.  Three of them were women, and one I talked to was leaving behind three kids of her own, the youngest of whom was one year old.  I’m glad I’m not the one who has to say goodbye to my kids for a year.  I can’t imagine.

We had passes to be able to go with Ian all the way to his gate.  We went through security–lots of little shoes off and back on–and then waited for the plane.  It wasn’t what you might expect.  Waiting for a plane is boring, even when it’s part of a significant moment.  The kids all got squirrely, and I sat with my husband but there wasn’t much to say.  ‘I love you’ is nice, but how many times can you say it in fifteen minutes before it loses any sense of feeling?  A couple of the other families asked if they could get a picture of us all together, and I just couldn’t do it.  I was so disheveled and my eyes were so puffy and Quinn was uncooperative….  I just couldn’t.  The other families seemed better at this.  They were smiling and seemed to be making the most of their time there.  I didn’t see anyone else cry besides myself and Aden, but maybe I missed it.  It’s hard to be observant of others when you’re sad because it’s such a myopic emotion.

We hugged Ian hard.  We watched him get on his plane.  We got about halfway out of the airport when I had to sit down in a row of vacant chairs and sob.  I had to get it out of my system before trying to drive all the way back to Milwaukee.  Mona waited patiently, and Quinn kept saying, “Why are you crying, mama?”  Aden tried to explain to him it was because daddy was gone, but when Quinn doesn’t understand something he just keeps repeating himself.  He can’t think of a new way to ask about what he wants to know, so he would listen to Aden, then say, “Oh,” and after a moment repeat, “But why is mama crying?”  Strangers in airports pretend not to notice tears.

After about a minute I pulled myself together and we headed out.  I told the kids they should try to nap on the ride, but none of them did.  When we arrived at their school at about ten in the morning, the girls were so discombobulated that they didn’t know what to make of the deserted playground.  At first they thought school was over and everyone was gone.  When I told them, no, it was not even lunchtime, they asked if they’d beaten everyone there and school hadn’t started yet.  Beginning of the day, end of the day–I could have told them it was bedtime and it would have seemed plausible to them.  I walked the girls into the building and helped them get late passes.  Quinn and I went upstairs to talk to the art teacher about good days for volunteering, then went to the violin store for a few hours.  We ate lunch.  We picked up the girls in the afternoon.  We made dinner and practiced violin and did baths and went about our lives as if we hadn’t woken up in Madison.  As if Ian would walk in the back door any minute.  As if nothing had changed even though life is now different.

The photographs Chris Kraco took of our family last week are lovely.  I’ll post some of the other ones soon, but here is the last picture of our family all together for awhile. 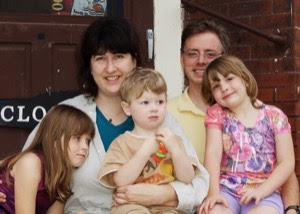 There are lots of little things I like about this photo.  I like that we’re sitting in front of our very own busniness that we’ve worked so hard for.  I like that Ian is wearing his yellow shirt that he specifically thought looked like a good ‘dad shirt’ when he bought it.  I like that I’m wearing the simple jade necklace I bought in Alaska.  I like that Mona is irrepressibly cute and that she’s wearing the new shirt she got for picture day coming up at school.  I like that Quinn is firmly planted in my lap as if it’s the only logical place in the universe to be.  I like that Aden wore her fancy purple dress.  And as much as I hate to see Aden sad in this picture, I’m touched by how tenderhearted she is.  She loves her dad, and how his loss affects her is clear in every part of that image of her.

My goal now is to keep things running smoothly and look on the bright side wherever I can find it.  It’s easy to point Mona and Quinn toward the positive.  They want to laugh and run and they are distracted by small pleasures.  Aden clutches sadness to her in a way that concerns me sometimes.  I don’t plan on seeking out the counseling services the Army provides for children in her situation, but I’m not ruling it out, either.  We’ll see.  If I can keep her occupied and focused on things she can do (such as writing letters and helping bake cookies to send and trying hard in school) and not let her feel helpless, we should be okay.

And I have to work at keeping my own spirits up.  Because I know some of the sadness I see in Aden is merely a reflection of my own. 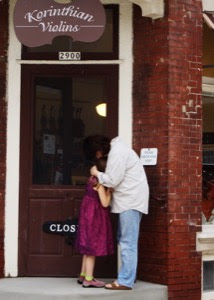