As it should be

Too often I feel as if the norm is frustration, distance, and disorder. There is too much to do, never enough time, and we don't see enough of the people we care about.

This past holiday weekend was the exception, but it felt like the way things should be. 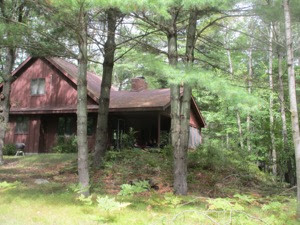 We got to spend Labor Day weekend at the cottage. All trips to the cottage are good, but this one was a throwback to more than a decade past when it was packed with family from all over. There were 13 of us there (three who stayed at a nearby B&B at night) and it was one of the best weekends ever.

My husband went out a couple of days ahead to set everything up and do much needed cleaning and maintenance. It was a lot of work (which the rest of us appreciated), but also a bit of quiet time alone which I think he needed. I got to drive out with my kids and my brother and his four year old. My brother and nephew arrived from LaCrosse by train, and they lost his luggage! I've never heard of that happening on the train. Luckily they had an abandoned car seat that we were able to use, and after a quick trip to Target to procure needed missing items, we headed to Michigan.

I loved having time to chat with my brother in the car, and all the kids did fine. The only partial hitch in the drive was that in the last twenty miles or so we became very low on gas, which is bad in the middle of nothing and after midnight. We took an exit and drove two miles into a tiny town where we tried the gas pumps, which seemed to be on despite the station being dark. What I've learned is you can activate all the electronic parts of a pump after hours (including the annoying screen that shows you ads), and it will take your credit card, but it will only give you three cents worth of gas. So that was fascinating! And adding the extra four miles to the trip when we could least afford to made for a more nail biting experience. But we arrived safe and sound and now I have a gas receipt for three cents.

We had all of Saturday and Sunday, and left very early Monday, but we packed a lot into a couple of days. Both my brothers were there with their kids, so we had all the cousins together. My cousin, Tony, even brought his daughter up to the cottage for the first time, so we had a bonus cousin. My Uncle John was there for there for the first time in forever, and my mom who cooked some insanely good meals. (We're talking grilled salmon and couscous with preserved lemon and cilantro, and roasted root vegetables, and blueberry crumble....) 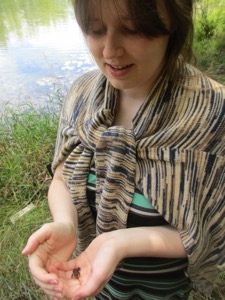 My brothers sprung for a pair of kayaks for the cottage and there were several trips out onto the lake in those. There was badminton on the beach, a few nice walks in the woods, frog catching, rope swing action, board games, cookie baking, movies, waffles every morning, and some practical work that goes better with a group like organizing the garage and getting things out of the basement that need to be hauled away. My brother Arno was even kind enough to help with some editing on my new book. 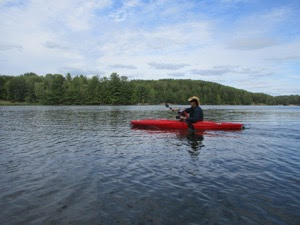 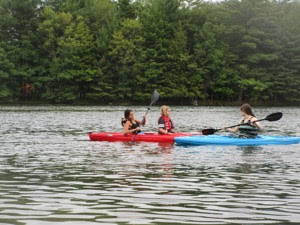 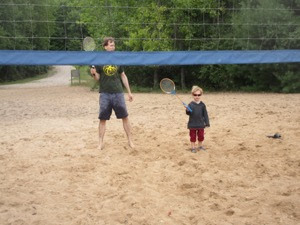 We got to teach my cousin how to play the family card game of Spite and Malice (which we didn't realize he didn't know, but I suppose he would have been a little young for it back when we all played at my grandma's kitchen table), and we had an excellent round of Telephone Pictionary the first night. That's a newer family favorite that a neighbor introduced me to a few years ago. Everyone writes a phrase or an idea on a piece of paper in a stack, and the stacks keep getting passed around the circle. If you're handed words, you use the next page to draw, and the next person has to interpret your drawing and describe it in words on the page after that. By the time you get through the stack, whatever you originally wrote is usually long gone and replaced with pure insanity. This round ended up with something devolving into some angelic blind doughnuts.

The cottage is just small enough that everyone is together in the same space much of the time, and there isn't much work to do on an average day. Chores are manageable. The wifi is almost nonexistent so people put away their electronics. The kids all camped out on cots together in the main room at night. The weather was cool and pleasant. I stayed up too late each night talking with people I love but don't see often enough. It was wonderful. Ian even stayed after a couple of days to do the laundry and cleanup so the rest of us didn't need to worry about it (and he got a couple more days of quiet).

Now I'm back home and Ian is off doing army stuff this weekend. Quinn's school finally started, Mona's doing driver's ed and is home late most nights, Aden got sick a day after we returned. Currently she's doing better, but Mona is down for the count, and Quinn is starting to sniffle and has pink eye. There is a ridiculous amount of laundry to do, the kitchen is a mess, and I've been putting in ten to twelve hour days at work all week to try and catch up after daring to take a few days off.

So I'm back on the treadmill of crazy and feeling behind on everything again. But I wish it could be the other way around, where the happy kind of togetherness at the cottage were the norm. At least it's there to go back to. Someday.
Posted by Korinthia at 2:31 PM