Due to a weird transition happening in our public school system's scheduling, my two oldest kids went back to class in the middle of August, but my youngest doesn't start until after Labor Day this year.  He got an extra three weeks of summer vacation, but while everyone else was in a different routine.  It's been odd.

I asked him if there was anything he would like to do during this last little bit of time he had free while his sisters were away all day, and he decided he wanted to go to Iowa.  He has a passion for geography as well as a desire to check things off lists, and Iowa is the only state that borders Wisconsin that he'd never been to.  We took to Google Maps and determined the closest destination from our house would be Dubuque.

I picked a day that was likely to be slow enough at work that I wouldn't be needed so that Ian could take the store, and after the girls were off to school, Quinn and I hit the road.  It's only about two and a half hours to the Iowa border, so not a big deal in our book.  We fussed with the GPS and found a restaurant to aim for, and enjoyed an easy drive where we left the rain on our side of the state and enjoyed clear skies over the Mississippi. 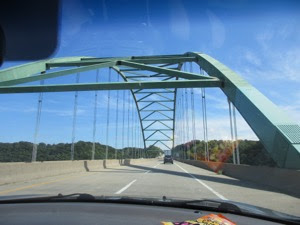 We worked on filling out passport applications (which didn't go well in a moving vehicle so it was funny), and we made observations about the landscape as we moved into the beautiful Driftless Zone.  We played word ladder games, flipped through radio stations, and made a list of things to Google when we got home.  We narrowed down what he wants to be for Halloween and talked about ideas for future trips.

Dubuque is nice, but mostly struck us as quiet.  We didn't see more than a couple of people walking around, but there was a huge line of cars quietly waiting in the drive through line at McDonald's.  We had lunch at a place called the Sunshine Family Restaurant that we chose mostly for the weird way our GPS pronounced its name, and the fact that they had breakfast all day and Quinn was in the mood for an omelette.  It was good, and fast, and friendly. 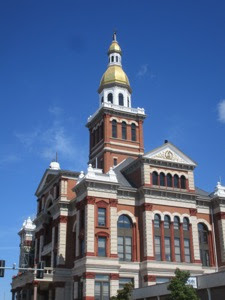 We walked around, admired the pretty city hall building (which made us laugh because it had scaffolding on it just like ours which seems to be eternally having work done), stopped in an art supply store, and then stopped at a couple of gas stations and a drug store looking for the right souvenirs. 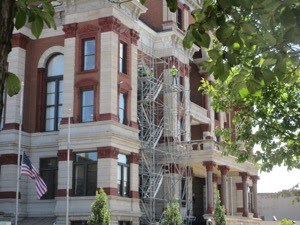 The main thing we were hoping for and didn't find was an Iowa magnet for Quinn's state magnet collection, but I'm sure we'll find one at a truck stop in the future.  We found a shot glass for Aden's collection, a silly key chain for Mona, a fresh pack of Dubuque playing cards for us (we've been playing a lot of rummy 500 at the violin store when he gets bored being home alone), and a new spinny lawn ornament for our side garden which we recently gave up on and put a tarp over and covered liberally with spinning decorations plus a couple of flamingos.  (It's gorgeous.  Or at least more interesting than the weeds were.)

We had an enjoyable drive home where we shared some candy and laughed at whatever.  (Including at a billboard that read "Your membership pays" and then had a "Dupaco" logo, so Quinn read it all as "Your membership pays Duapaco" which is probably more accurate than what they were going for.)

There are a lot of things I feel behind on, and I get frustrated often about how much I'd like to accomplish that never seems to happen, but I never regret taking time out to really spend a day like I did with Quinn.  When I stop and think about it, everything else is actually the time out.  Sure, there was a pile of rental instruments that needed cleaning at work, and some writing I need to get done for a panel discussion coming up, and endless chores at home.  I need to make a living and keep our lives in order, but days were I get to hang out with my son and have lunch with him in Dubuque simply because it sounds fun are the whole point of anything.  That's the kind of thing I should be basing my life around, and I try to as best I can.  I like my job, but I like being home after school to talk with my daughters about their day as I make dinner more.

I wish I had more Dubuque kind of days, but at least I'm always appreciative of the ones I do have.  Everything else is there just to make those possible. 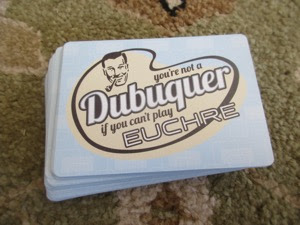