As this school year begins wrapping up I want to take a moment to acknowledge the greatest development for me in my children's school attending lives:  the bus.

Aden started taking a bus last year for high school which is almost six miles away, but this year the other two kids started taking a bus too, and to not have to get up and drive anyone anywhere first thing in the morning is amazing.  We still make breakfast (although on days when we can't it's just fine) and we still have to prod the kids awake and remind them to put on clean clothes, but that's it.  Not braving the cold or the snow or the rain or having to find a spot for drop off is wonderful.  Equally wonderful is not worrying about the pickup and having to interrupt my afternoon to get the kids at school or remember to write to note so they can walk to the violin store if I can't get them.  I love it, and I think the kids like having more autonomy.

Why didn't we do it sooner if it was an option?

People asked me often when Aden started school and Ian was deployed why I didn't just have her take the bus the mile and a half to school.  But she was four and Mona was two and I was pregnant and the bus stop was a block away.  So I'd have to have gotten up and gotten everyone dressed and bundled and then waited outside with Aden for the bus because four was too little to stand alone on a corner out of sight on dark winter mornings.  Especially once Quinn was born it would have been really hard to wait for a bus with Aden.  (Thankfully that first year of half-day kindergarten a friend was kind enough to pick up my daughter at the house once it got cold so I didn't have to struggle with getting a toddler and a newborn into the car every day either, and that was a godsend.)

Anyway, after giving up the bus idea initially as impractical we just got into a habit of driving the kids to school.  But this year when we got the bus card in the mail over summer it said the new stop was right in front of our house.  That caught my attention and made me reassess and I realized that my kids could well have walked themselves a block away to catch a bus the past few years.  We don't always recognize in what ways kids getting older changes things because we don't always remember to reexamine our own habits once we get used to something.

I asked my kids if they wanted to start taking the bus, and they said sure.  Quinn was interested in it because he said other kids often had "bus stories" and talked about things that "happened on the bus" and he wanted to have his own stories.  I don't know if anything particularly noteworthy has since happened to him since he began taking the bus, but I did enjoy on the first day of school hearing several children happily exclaim, "Quinn!" when he got on.  (Mona says Quinn always has lots of friends on the bus.)

They've gotten good about keeping track of their own keys and letting themselves in the house at the end of the day.  And frankly, it's probably less embarrassing for them not to have a parent waiting outside the school.  I got spoiled by Aden who will still run up and hug me anywhere, and has never been embarrassed to see me in her school or around her friends, but Quinn and Mona are more aloof than that in public.  I never liked the inconvenience of the school pickup, but I never tired of the joyful greetings I got there when the kids were small.  The glee of a small child running to you with arms wide on the playground is one of the best parts of parenting.  The gloomy shrug of vague recognition of your presence not so much.  Probably better for all of us at this stage to have them just take the bus.

I know each step toward their independence is another step away from me, and often I find that painful, but this one has been liberating.  It took a lot of mental energy not to get frustrated getting the kids off to school most mornings.  I am not good at being up early, so to have that extra bit of lazy time at the beginning of the day where I'm not rushed and not responsible for everything has been great.  I feel a little bad some days when I don't see the kids at all before they leave for school, but not bad enough to want to leave a warm bed.  (All hail the bus!) 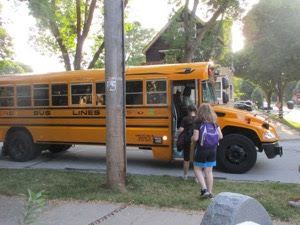 Posted by Korinthia at 9:37 AM