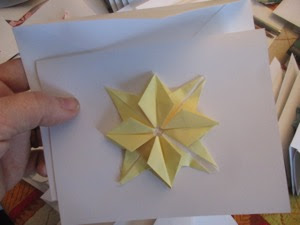 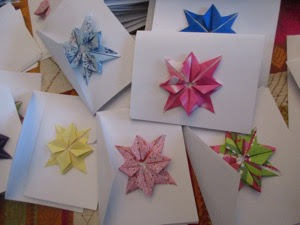 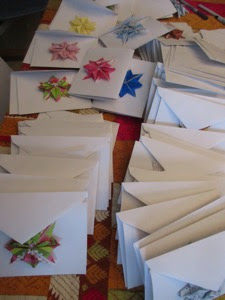 I didn't want Quinn to address an envelope to everyone in the book--the dentist, the school, the service station, none of them need a card.  But there are addresses in the book that look like something to skip that we don't, like my old dojo.  So I flipped through the book and made a rough list for Quinn to follow, and then added extra names that I knew were not in there (such as neighbors we can hand deliver to, whose addresses are currently unnecessary to document, or people we interact with regularly but don't actually know where they live), and set him loose with a pen and a big stack of envelopes.

For the most part he did an excellent job, but there were several envelopes addressed upside down.  There were also a few botched names, and some confusion about what was an extra last name and what was a child.  I left most of those alone.  The only ones I quietly redid myself were ones where he included a spouse that had died.

One of the things I enjoy most about spending time alone with Quinn is he asks me a lot of questions.  If the radio is on he'll want me to explain words and events from the news, which often challenges me to think about things in the world more carefully.  When the radio isn't on he tends to ask me to explain things about myself, which can be an even bigger challenge.

Quinn had lots of questions about how we do the holiday cards.  Even as he was happily immersed in his task he wanted to know, "Why do we do this?"  I told him it probably isn't as necessary as it was in the days before social media, but that traditionally this was a time of year to catch up with people.  There are a lot of people I've been glad to have in my life but whom I don't actively pursue activities with that are worth taking a moment to acknowledge.  This is a time of year when doing so doesn't seem out of place or awkward.

Then Quinn wanted to know who many of these people were.  "Oh, well, my mom once had a friend she adored and he died and that's one of his children whom we used to see around Christmastime and she sends me a card and I like seeing how her children have grown so I assume she likes hearing from me, too.  That person I was friends with in college and you met her when you were a toddler but I haven't seen her in person in years and she never writes back but she's told me she likes getting our cards and when I write one to her it reminds me of playing in orchestra together.  That person I only know from her blog but I'm really glad to know her and it's nice to reach out once in a while in a tangible way so the friendship feels more real.  That's a relative we never see, but family connections are important in their own way and I think my grandma would have wanted me to send this person a card so I do it to honor her."  Etc.

Between the cards and decorating the tree I got to thinking a lot about what constitutes a tradition.  Religious people, or people with strong cultural identities, have traditions readily available to borrow from.  People who share those traditions seldom question them, and their meanings often just become assumed.  Families like ours that don't have those templates to draw on kind of dabble in what's available and then create meaning for ourselves.  But within many families either way there are habits or shared events or preferences that shape what they do, and when they get repeated they often get termed traditions as well.

My daughter is not a fan of change, and when she likes something she wants to repeat it as closely as she can.  Hence, for the past several years she has had a skating event for her birthday with about a dozen friends followed by a sleepover for just the girls (although boys can come back to the house for a bit, they just get driven home before midnight).  She loves this so much that even though there are other things that might be fun, too, she just can't imagine altering any of it.

Part of this event is walking over to Target and letting everyone pick out snacks for the evening.  This rose primarily out of the fact that I didn't want to mess up providing foods for vegans or people with allergies so better all around if everyone selects things for themselves and I just pay for it.  Aden refers to this trek to Target with her friends as a tradition.  How many times would we have to do that for it to be reasonably called a tradition in the eyes of others?  Does it start at twice?  Does it have to get passed down to another generation before you can apply the term?  Can something retroactively be referred to as a tradition if it was too new to qualify at one point, but later definitely is?

I don't know if the snack walk is a tradition or not, all I know is sometimes Target makes some peculiar choices when creating signs, and our current favorite is this one for bananas near the checkout: 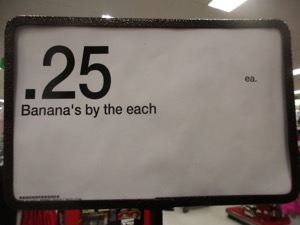 By the each!  We like that "each" is there twice.  Quinn was mostly amused by the absurd apostrophe use.  We decided the only thing that would make the sign better was if they had used "buy" or "bye" instead of "by." 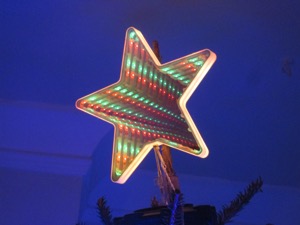 We also picked up a new star for the tree at Target this year.  Normally we make one, but that's become another tradition that isn't really a tradition.  For years we didn't have a specific topper for the tree, so Aden and I would throw one together using paper or paint or glitter or plastic jewels or whatever else we had lying around.  Usually they are too flimsy to last and we end up making another one the following year.  But then we saw what we dubbed the "infinity star" at Target and decided we wanted that instead.  We actually mulled it over for a couple of days because did we really want to interrupt this "tradition" of flimsy stars?  Yes, yes we did.  That crazy blinking star is cool and goes well with the weird tree dazzler lights we picked up last year.  We can make other flimsy things if the desire hits us. 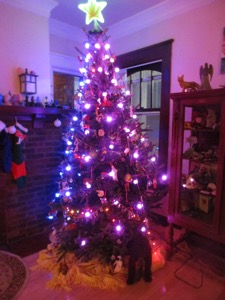 Putting up our ornaments together is definitely a tradition.  We have a funny hodgepodge of things on our tree that always make us smile and remember and laugh.  There are things from my childhood and Ian's, and I have a small collection of things for the tree that were my grandma's that are bittersweet to hang.

The newest "tradition" is the dog using the tree stand as a water bowl.  (That's his fuzzy little butt sticking out at the bottom of the tree during a recent drink.)

Quinn was asked recently at school to write an essay about his favorite holiday, and I asked what the contenders were.  He said Halloween, Easter, and Christmas.  He was leaning toward Christmas, but figured everyone else would pick that as well.  Halloween he likes for being able to wear a costume, and of course for the candy.  Easter he likes doing the egg hunt each year, especially in New York.  But what he likes about Christmas?  The road trip.

When we moved to doing Christmas in Detroit several years ago, the kids still wanted to open presents under our own tree on the day of, so we started a new routine of doing Christmas morning at home, then hitting the road.  I felt bad about it at first because spending all day in the car did not seem like a fun way to spend a holiday, but the kids love it.  Quinn says he likes getting presents and then deciding which ones to bring with him.  We usually get them a new DVD and they watch that together huddled in the backseat.  They have candy canes to suck on and usually a new stuffed toy to cuddle and we are all together, and all of it makes them happy.  I've always appreciated that my kids are good travelers, but didn't realize how much they enjoyed actually being in the car.  (No wonder they liked the eclipse trip so much.  That drive barely had a destination.)  Maybe it's a routine if it's boring and a tradition if it brings you joy.  If so, the Christmas car ride qualifies as a tradition.

Happy Holidays to everyone!  No matter what you celebrate or what you purchase by the each, we wish all of you peace and joy in the coming year.

Posted by Korinthia at 8:54 AM