Stray Thoughts in the Morning

Things are moving a mile a minute anymore, and any one of these thoughts could have been a post in a less hectic time, but in no particular order here are things I've pondered and learned from lately:


It's good to be able to return to a space that doesn't change.  Our cottage is that for us.  My brother was able to come with his family this summer, and he hadn't been there in almost 17 years.  He remarked immediately how amazing it was that it felt the same.  That's been by design--we've changed very little since my grandma died, and the place still feels like her.  She would lament that we've let the garden go, but someday we'll be there long enough to plant begonias by the front porch again, and weed some of the plants along the stairs on the hill.

It's also good that at the cottage the internet is spotty at best.  There is just enough of a signal from the neighbor's house that he said we could use that usually every other day I can upload email while I'm there and at least make sure everything is okay back home.  Otherwise being unplugged is a good thing for everyone.

My dad has been gone for two years now.  It doesn't really get easier.  I just don't burst into tears about it as often.  But damn I miss my dad.

My grandmother would have been 99 this year.  I miss her too.  There is so much I wish I could talk to her about.  It would have been so nice for my kids to have really known her.

Grandpa, too.  I remember when he died he seemed really old.  But now 70 doesn't seem that old.

Speaking of my grandparents, they had black walnut trees in their yard.  And I discovered a walnut tree across the street from the violin store the other day.  I parked my car, then spotted green balls lying all over the sidewalk and in the gutter.  (Then I decided to move my car because I've seen the kind of damage those walnuts can do when falling from the trees!)  The smell of the walnuts is unique.  There is a sharp odor to them with a hint of wanting to smell sweet that doesn't quite come through.  It brought back so many memories picking one up again.  How many walnuts did my poor grandma pick up over the years?  They made such a bang as they rained down on the house.  And she had to get them up before she could mow the lawn or they went flying in dangerous ways.  There were walnut trees all around that house.  They have beautiful leaves.  I remember lying with my grandpa in the backyard just looking up at the leaves. 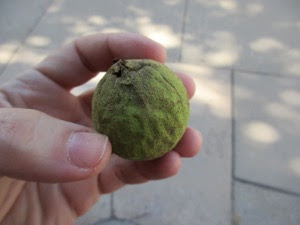 I miss writing.  I'm ashamed that my two other novels have sat for about a decade at this point awaiting a real edit.  I'm sad that outlines for other novels and short stories sit in a folder on my laptop getting metaphorically dusty.  I really liked writing fiction.  Now I'm so swamped I can't even keep up with the most basic things I'm supposed to be doing just to get by day to day.  I'm trying not to feel as if all my dreams are dashed, but each night I go to bed thinking how another day slipped by without my doing the things I most want to do.

The most painful thing I know is not being able to trust love.  Years ago I felt betrayed by someone I thought I would love forever and have been left shell-shocked by it ever since.  The list of people I truly trust with love is now shockingly small.

I didn't get my bike out of the basement this summer.  If there's time today my son said he'd go for a ride with me.  I hope that happens.  But there are lots of things I wish would happen that seem to slip away before the sun sets.

I wish food weren't a topic.  Aside from sharing some fun recipes (Quinn and I are going to attempt chocolate souffles this afternoon), I don't want to hear what anyone has to say about food.  I don't want to hear about clean eating or good foods and bad foods or peanut allergies or carbs or gluten or anything.  The judgement around food and what people eat is omnipresent and I'm exhausted by it.  Too many people act like there is one right way to eat and I don't want to hear about it anymore.  Just eat what you eat and leave other people alone.

Migraines are horrible.  I've had a few in recent months where the thought occurred to me that death wouldn't be so bad.  Not that I want to die or would aim for that outcome, but just that as a concept, having everything end wouldn't be bad if that included the pain.

There are some things in life that are like emotional migraines.  Those are horrible, too, and also make you not fear death.

Pets are weird.  It's just a weird idea that we bring some animal into the house and it lives alongside us in its own routine.  Our dog is so peculiar and ridiculous and we love him and it's hard to even know why some days.  He messes things up and complicates even simple actions like walking down the hall (because his alliances shift depending on whose room he's closest to) and yet I like hearing him move around the house and do his thing.  He's not a good dog, but he's our dog, and that's enough.

Parenting is not for the weak.  It's also not for people who want what's fair, because there isn't necessarily a clear line from point A to point B where you get out what you put in.  I remember when I was working in a restaurant in Pennsylvania a couple of years after college and listening to some older women chatting in the back as we folded napkins and sorted flatware.  There was one very sweet woman who was lamenting about whatever recent mess her son had gotten into, and everyone listened and nodded in support.  I was in my 20s and couldn't believe what I was hearing, because her son sounded awful and this woman seemed so thoughtful and kind.  I couldn't figure out how she'd "let that happen."  The woman in charge of the floor said to me, after the sad mother had left, that it's the luck of the draw.  You can be the nicest best mom in the world, and with some kids it didn't make a difference.  You get what you get and you live with it.

I actually think about the woman in charge of the floor at the restaurant a lot.  Her name was Sue.  She was incredibly good at her job, and even though it was clear she was our boss, she would do any job as needed.  She could make coffee or change a tablecloth or refill water glasses.  She was the reason the restaurant ran as well as it did because she was expert at preventing problems before they could start.  She was tough and smart and confident without ego.  I don't think she was appreciated by upper management appropriately.  I am certain she was not paid the way she should have been.

There's more rattling around in my head, but I have to go out and look for deck stain now.  It's the last good weekend to try and get anything protective down on our back deck because fall is really here already.  We never did get around to boxing the winter coats and gear, but now we'd be getting them out again anyway.  I suppose that bit of procrastination worked out as a time saver.

I feel like life would be simpler if my mind weren't so cluttered.  I hope other people's thoughts are less jumbled in their brains, but I suppose that's how we all are.  Except for that one roommate I had in college who could just somehow think about nothing.  She didn't know what I meant about thinking about lots of things all the time.  I asked, "So when you're just sitting there not talking to me or listening to something what is going on in your head?"  And she said, "I don't know, it all just kind of goes grey."  There are moments that idea horrifies me, and others where it sounds quite nice.  Today it sounds sort of soothing.