This past weekend we decided to try Escape the Room.  It was really fun. 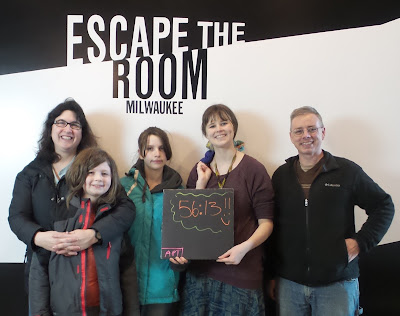 Escape the Room is a game where you are in a room filled with puzzles and locks and have one hour to figure how to get out.  We managed to escape (with lots of hints from the Clue-Master) with over three minutes to spare!

I'm not going to give anything away because it would be a lot less fun for anyone who wants to try it to know much in advance, but I will mention a few general things, and some that were unique to our experience.

Here in Milwaukee's version of Escape the Room there are currently three rooms to choose from: one that looks like a regular apartment (which is a good introduction and the one we chose), a spy theme room, and something that is described as Indiana Jones style.  For those who are wondering, there is a panic button that ends the game if you decide you really must leave.  Also you are monitored the entire time so people on the outside can guide you when necessary, so you are never really trapped or in danger.  They do ask anyone who needs to use the bathroom to do so before you get locked in the room.

Normally the apartment room holds up to twelve people who are supposed to work together to solve all the puzzles, but we went during the Super Bowl (being among the few in the country not interested football) so it was just us.  I'm really glad we got to do it alone as a family, and I'm hoping in the future to try one of the other rooms when we can buy up all the tickets and bring my niece or brothers and other family along.

There is a screen on one wall which most of the time shows your time counting down, but every once in a while shows you a hint.  There is a lot to puzzle out in that room and the hour goes quickly, so I'm sure if they see you're not hitting certain goals by certain times they nudge you along so you still have a chance.  I think Quinn was the first one to notice when a hint popped up, and after that we made sure to look at the screen periodically.

There are also cameras and mics and speakers, so it's a little weird at first knowing you are being watched and heard, but we came to appreciate it.  At one point while scrutinizing everything I looked up at the ceiling and said, "Hey, there are numbers written on the pipes!" and immediately a voice broke in with, "Those are just numbers on pipes."  It helped to know where not to waste time.

It also helped when we did something right and missed the result to have someone tell us that, too.  At one point we did something that affected something in another room, and if the Clue-Master hadn't brought our attention to it we would have just assumed we had failed that task.

They did have to open the room to come in and help us twice.  Once was for a technical problem with a computer that wasn't our fault, and the other time was to lend us a phone.  I remain amused by how it is simply assumed everyone has a cell phone.  I know they are ubiquitous, but many people are dependent on them to a degree that they can't conceive of someone surviving without one.  (How do I live and breathe?!)  So they just assumed when they designed the game that if they gave you a phone number to call, you could call it on your own.

When we realized we needed to call a number we all just stood there.  And when the voice told us to just pull out a personal phone I explained, "We don't have one."  There was stunned silence for a moment while outside the room they contemplated how among two adults and two teenagers there wasn't a cell phone available, but then they opened the door to lend us one of theirs.  So that made me laugh.

But I think the best part was the final puzzle involved having some Latin skills, and so we called in Quinn.  They told us afterward that the last bit is normally the stumper people have trouble getting past, and they couldn't believe we were calling in the ten year old to do it, but hey all those Latin lessons have to have been worth something by now!

In any case, it was great.  The other rooms are supposedly harder, and we're looking forward to them someday.  (Assuming I can find another time to Escape the Violin Store.)