If I really wanted this blog to be entertaining I would simply write about my brothers all the time.  Either of them is an easy go-to topic for me at parties because there are endless interesting stories available, and in case I'm in a situation where the company is boring, talking about Arno or Barrett keeps me amused.  I love them and could not have asked for kinder, funnier, or more intelligent siblings.

Arno is a neuroscientist who currently works at the Child Mind Institute in New York City.  He always talks to me about his work as if I'm a knowledgeable colleague, which is flattering, but consequently I have no clear idea what he does.  The bits I can follow are fascinating, and he does important research that will improve people's lives, but don't ask me to explain any of it.

But this post relates to a project coordinated by my other brother.  The baby of the family by four minutes, Barrett is an associate professor at the University of Wisconsin LaCrosse where he specializes in entomology and insect sleep research.  He's also a talented artist who has done lots of model making and scientific illustration, and he is particularly interested in cultural entomology which is where insects meet art.

Last year he commissioned 30 artists to make small books with the theme "Insect Dreams."  He was generous enough to invite me to participate, and despite the limits on my time there are moments when an intense little project is a good distraction from other things so I recently buckled down over a weekend and made my contribution.

I decided to make a Luna Moth's dream.  Originally I had words in mind for it, but then it just seemed wrong for a Luna Moth to dream in words and I made it just a collage work. 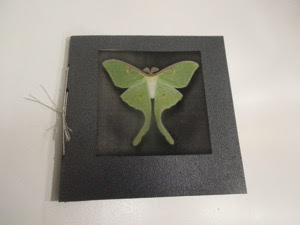 The book is little, because we were supposed to stick to measurements about three inches square so they will all fit in a special display cabinet.

I have always found it intriguing that moths fly toward light, supposedly mistaking it for the moon.  Because what would a moth actually gain by reaching the moon?  What does it think it will find there?

My Luna Moth is dreaming of flying toward the moon... 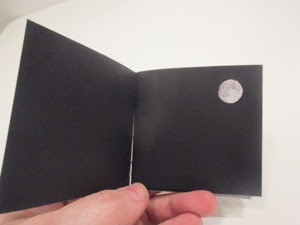 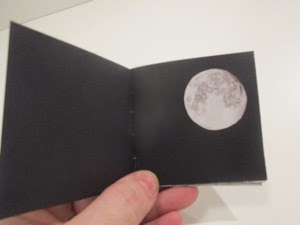 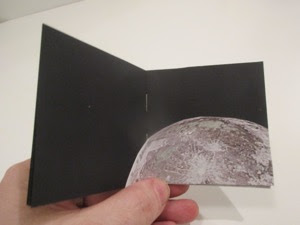 And when it reaches the moon it finds friends.  (My first thought was to have the moon covered with its favorite food, but it turns out Luna Moths don't have mouths, so they can't eat and they only live about a week.  If this were an animation project I would have it dream of growing a mouth and then eating a bite out of everything including the moon.) 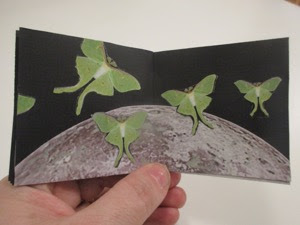 And then the dream expands to include yet more moons.  Because once you've reached your dream that doesn't mean there isn't anything left to aim for. 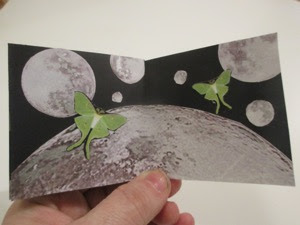 So that's my book!  I made 31 of them.  I found out as I was putting the last moths on the last page that I shouldn't have used rubber cement because Barrett said it was non-archival and would fail and age in bad and unattractive ways.  But you know what?  I am going to claim that's part of the design because you can't hold dreams too long without them changing or coming apart.  The books are ephemeral now, like the dreams they represent.

I can't wait to see the whole cabinet!

Posted by Korinthia at 5:17 PM