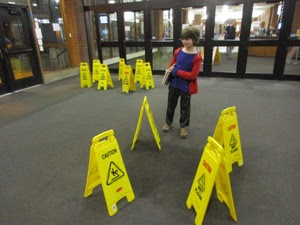 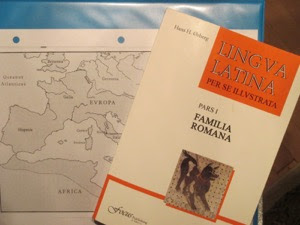 From what I can tell, we are not being taught Latin in any traditional way, so for me it's sometimes confusing, but it's working well for Quinn.  The teacher likes a book called Familia Romana, and it's essentially an immersion course.  There is no other language in the book but Latin; you just dive right in.  There are pictures and maps to help, and the information is repetitive so you piece things together as you go and figure things out.  It can't be done without a teacher to guide you because it gets complicated quickly, but most of it is designed for you to puzzle out on your own and gain a sense of accomplishment as you go.

It starts out easy.  The first sentence in the book is "Roma in Italia est."  Rome is in Italy.  Got it.  Then, "Italia in Euorpa est."   Italy is in Europe!  Got that too.  But it took us a bit to figure out that "sunt" was like "est" but plural, and there aren't any articles.  Consulting the map helped us determine things like "fluvius" was "river" and "parvum" was "small."  Our teacher explained that the letter "v" was pronounced like a "w" and helped us with the sounds of all the vowels.

One of the more unusual things we've had to adapt to is that in Latin the order of the words doesn't really matter because everything has a case that defines its role in the sentence.  Nouns and proper names all change based on how you use them, so, for instance, the word "dog" is "canis" if it's the subject, but "canum" if it's the object.  I can say "I threw the ball at the dog" or "I threw the dog at the ball" and as long as I use the right cases for dog and ball the meaning will be the same both ways.

The most confusing example of that for us to figure out recently was: "Equus qui Cornelium vehit pulcher est."  The translation would be: "The horse, which is carrying Cornelius, is beautiful."  "Vehit" means to carry something in terms of transporting or taking something somewhere.  I can't think of an equivalent in English really, and Quinn and I got it in our heads that the verb in the sentence must be about "riding" the horse.  But "equus" is in the nominative, so it's the subject.  "Cornelium" is accusative, so he is the object.  And Quinn and I had to ask the teacher why it looked like the horse must be riding Cornelius.  (Crazy Romans!)

Because the order doesn't change the meaning of individual words, you can move them around to emphasize things.  The funniest example to us was a line in our book about how a servant named Medus looked at a beating stick (baculum) on a table and then left the room.  He was nervous because he'd stolen some money from his master, so seeing the beating stick got his attention, and to emphasize that idea the sentence began "Medus baculum...." so the beating stick came before the verb and before anything else after "Medus" because that's what he was most concerned about.

The book in general is pretty entertaining.  It's the story of a family that lives not too far from Rome.  There is a dad, a mom, two boys and a girl, and they have a hundred servants.  The first time we meet them the little girl is singing and it annoys her brother, so he hits her and she cries.  The other brother thinks that's bad and hits him, then mom gets involved.  There is more crying.  Dad sleeps through much of that.  It's interesting enough to keep you reading, even when you're not sure exactly what's going on during the first read through.

Our favorite word so far is "num."  I wish we had something like it in English, because it's like a way of indicating sarcasm.  If you ask a question starting with "num" then you already know the answer will be "no."  Quinn and I use that at home now, as in "Num is the dog being good?"  (The dog is seldom good.)

We need to make a list of regular words or phrases that we can ask our teacher to share with us.  We've learned a lot of words, but not much we can apply to everyday life yet.  A friend of Quinn's at school asked him how in Latin you would say, "Nice to meet you" and Quinn told her that he didn't know how to say that, but he knew two verbs for hitting people.  (We also know three ways of telling someone to shut up, so this is not the Mr Rogers approach to Latin.)  "Itaque" is "and so," "autem" is "moreover," "ancillae" are "lady servants," and a "perisylum" is really from the Greek and it's a sort of garden with pillars around it.  Our vocabulary is a little weird so far, but we're getting there.

One of those verbs for hitting people is "pulsat" which means "pushes" and is where we get the word "pulse" from, because it's pushing.  For me, that element has been the most interesting thing--finding out the roots of so many words.  I remember having a light bulb moment last year when we were reading a sentence about servants and it mentioned "and the others" which was "et ceterae."  The letter "c" is always like a "k" in Latin, so it took me a minute to realize that was where we get "etc." from--it means "and the others."  "Vocat" is "calls," and I could see how the word related to everything "vocal," but then the teacher asked us to think of other words beginning with "voc."  I came up with "vocation" and wasn't sure how it related, and he said it meant something that was your "calling!"  How cool is that?  "Probus" means "good" (as in good behavior) so "probation" means being tested to see if something is good or not.  Every week we learn something like that, and it's great.

Quinn has found this handy in school already.  He told me he took a test where he didn't know some of the words but was able to figure them out through Latin.  The word "auditory" was on the test, and he remembered "audit" is to hear, so he used that to find the right answer.  He breaks down words all the time now.  When we learned "aqua" was water, he told me on the way home that "aquarium" must mean "a place of water."

We're also getting a good lesson in parts of speech and elements of grammar that don't usually get taught in elementary school.  Quinn knew already about prepositions and nouns and verbs, etc., but we're learning about relative clauses and passive voice in Latin that will help him with English, too.

Learning any language makes you stop and reexamine your own more critically.  I wonder about things now, such as the word "over."  It means "above" something, but it also means "finished."  So I think of "over" as a preposition, but it's also an adjective.  How did that happen?  And how confusing is that to explain to someone learning English?  Quinn and I collect questions about such odd things and ask the teacher sometimes, and usually he's able to tell us how something comes from the German or the Greek, or if we're lucky from a Latin root, but when he doesn't know he ponders with us and promises to help figure it out later.  (I miss being able to ask my dad such questions.)

Because we're learning everything by reading stories, we don't do much straight repetitive conjugating, so we don't know all the forms of everything yet.  We recognize the nominative, accusative, genitive, vocative, we're starting to get a handle on the ablative, but we don't know the dative yet, other than to know it exists and our teacher always says we're skipping it for now.  So Quinn and I just whooped when we were watching Monty Python's Life of Brian for movie night not long ago and the dative came up.  There is a great scene where a Roman soldier catches Brian writing "Romans go home" in Latin on a wall, and the soldier stops him to correct the grammar.  He makes him conjugate, and then tells him some part of the sentence should be in the dative and Quinn and I went "The dative!  The one we don't know!"  (The real punchline in the movie is that after fixing that one line of graffiti the soldier then instructs Brian to write it out a hundred times, but for us seeing the dative in action was the funniest part.)

I don't know how long Latin will continue to hold Quinn's interest, but I'm willing to go with him as long as he likes.  Even if we stopped today we'd have learned a lot and created some fun memories.  Annus bonus.  Lingua Latina gaudium est.