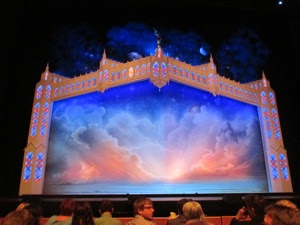 We went to see The Book of Mormon here in Milwaukee this weekend!  The original plan (when we bought the tickets half a year ago) was to go with my brother and his wife, but that was before their baby made different plans for them.  So we decided to take our daughters instead.

Aden and Mona are 13 and 11, and they may have been the youngest people in the audience.  I didn't see any children when I looked around at the packed house at the start of the show.   (Maybe people with kids were in cheaper seats.  We splurged when we got ours because having seen the show in New York a few years ago we knew we wanted to be front and center.  There were only about five or six rows ahead of us--it was a great spot!)

It's not a show for kids.  Despite the repeated references within it, it's a long way from The Lion King.  I figured Aden would be okay, but debated if Mona was still too young.  I decided the only real problem was that there is a lot of swearing, and my kids and I don't really have an issue with swearing.  It's superstitious to believe one word for poop is somehow worse than another word for poop.  My kids are aware of most swear words.  They know not to use them in front of adults who would have a problem with them or in front of children in general.  They have no interest in using them, however.  We robbed those words of any power years ago by not caring about them in our own home.  Ian and I seldom swear anyway so it's not like it gets modeled often, but I don't worry that I have to censor myself in front of my kids if I do.  Anyway, I decided keeping my kids from this musical based on swearing was ridiculous.

There was also a scene with some simulated sex acts using comically long hose penises that I'd forgotten about, but oh well.  That was balanced out by Ian's and my feeling good at having provided the girls with enough entertainment experiences that they knew all the references to Star Wars, Star Trek, and hobbits.  We had to explain who Johnnie Cochran was, though.  And Jeffery Dahmer, but he's a local monster they should be aware of anyway.  Hitler they were familiar with.  And I was glad we gave them a crash course in basic Mormon behaviors, otherwise the bits about coffee or repressing homosexuality would have gone over their heads.

They both really enjoyed the musical.  The songs are catchy, the singing and dancing were great, the staging was wonderful, and the pit was excellent (as someone who has played in a pit more times than I can count I know better than not to mention the musicians!).  Aden, when asked, said the whole thing was equal amounts weird and good.  Mona loved all of it.  Neither of them think there is any way to explain it to their friends without being inappropriate.

Which is actually the genius of The Book of Mormon.  It's obscene while being sweet, silly while serious, and addresses some deep concepts brilliantly and in a way that left my face sore from smiling so much.  You wouldn't think a story that relies on female genital mutilation as a plot point could be funny while not diminishing the horror, and yet it is.

The show treats its characters with deep affection.  There is never a point when you are laughing at the Mormons that it feels mean-spirited.  They're not stupid, just naive.  Their earnestness is endearing.  By poking fun at one religion it really addresses the peculiarity of all religions so the blasphemy feels generalized, and no one is really spared.  The relatively recent creation of Mormon theology makes it an easy target for exposing the absurdities inherent in religion in general, but it doesn't dismiss religion as if it has no value.  The story, ultimately, is about people using stories to form connections and provide hope, and that's something this atheist can easily get behind.

For me, the whole character of the musical can be summed up in the song "Hasa Diga Eebowai" which is a song performed by the people in an African village where the two naive missionaries have arrived to spread the word of God.  The villagers are plagued by terrible suffering, but the song is joyful, and then unexpectedly obscene.  The missionaries are shocked to discover the phrase translates as an insult to God, and just at the point where you might decide the swearing is over the top they sing, "If you don't like what we say, try living here a couple days, watch all your friends and family die, Hasa Diga Eebowai."  Their circumstance is the obscenity, and words can't come close to touching it.  It forces you to stop and realize that if you are more offended by the words than their plight then you need to rethink your priorities.

There are some excellent lessons in The Book of Mormon, such as putting the well-being of others before your own aggrandizement puts you on the right path, and that tap dancing in the right context is still cool.

So I was sad that my brother and his wife didn't get to enjoy the show with us, but I'm glad my kids got to go.  And now I can play my CD of the cast recording when they are around!  It will make for some age-inappropriate sing-a-longs in the car this summer, and that's just fine with me.  (Definitely one of the perks of not having pre-schoolers anymore!)

Posted by Korinthia at 8:28 AM