So much to write, so little time....  This is just a quick post to let people know I"m not dead, just swamped.

In my world there have been rehearsals, concerts, army things, a ton of work (yesterday was 12 straight hours and I still didn't get to everything), snow, cold, one kid broke a wrist.  Blogging time has been hard to come by.

In the meantime, here is the rare non-blurry picture of my dog trying to get me to stop working. 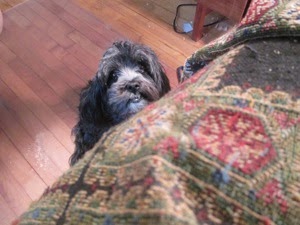 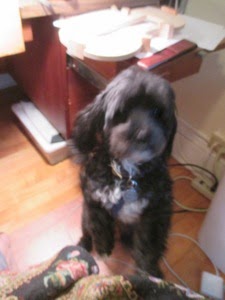 When I'm in my shop at home working on violins Chipper gets anxious.  He does not like it when I do things, so he looks at me pleadingly and occasionally puts his paws in my lap while I'm trying to carve.


Then he curls up under my chair, which has wheels, so I worry the whole time I will roll over him.  Chipper also does not like it when everyone else has gone to bed and I'm still up.  When he gets tired of waiting for me in my shop he curls up on the living room couch and passes out and waits to follow me upstairs when I finally go.

Sometimes he's too zonked to notice when I go to bed and we hear him on the stairs a few hours later.  When I say hear him on the stairs, I don't just mean walking up, I mean he whimpers there.  Chipper is a weird, anxious dog with issues and he goes through odd phases.  The most recent phase is not remembering how to walk up all the stairs.  He'll get within two steps of the top and then just cry and hope someone carries him the last little bit.  If we ignore him, eventually he comes all the way up on his own, but there is always a crazy thump/scrabbling sound to it, as if he somehow fell up the stairs.

We're hoping this phase doesn't last much longer, but it's better than the last one, which was being afraid to take walks.  We would get out the leash and he would hide under the couch.  We ended up leaving the leash on him all the time so that when he hid under furniture we could still drag him out.  Thankfully now after several months of that he's happy about walks again, just not about stairs.

Our dog is weird and sometimes obnoxious, but we love him anyway.  There are moments I wonder if he's worth it, but Ian put it in the context of most people having to put up with annoying relatives or struggles with kids, and we are very lucky on that score, so the dog tries our patience and keeps us humble.  At least he doesn't shed.  And he looks cute in a sweater.

Anyway, need to get rolling.  There are errands to run and possibly a trip to the circus in the works.  And that violin to carve if Chipper will let me.

UPDATE:  Circus was fun!  My kids had never been before so I'm glad we were able to get in.  Now to get to that violin....
Posted by Korinthia at 9:57 AM