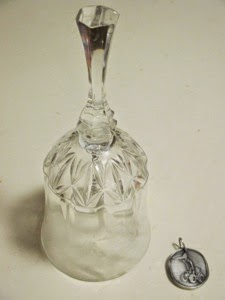 Our bell came apart this week.  I haven't quite figured out a way to repair it, but it's weird not having a bell.

When we lived in our first house across the street it was about half the size and sound traveled in it a little too well.  If I called up the stairs to get the kids down for meals that worked fine.

In the current house, not so much.  It's bigger and the doors are thicker, and even though creaks and thumps carry from floor to floor, I quickly found out if the kids were in their rooms they would never hear me from the kitchen.  To call them to meals I had to walk to the other side of the house and scream up the stairs, and often that wasn't enough and I'd have to go all the way up.

But the sound of the bell carries!  We have a glass bell with a tractor engraved on it that a cousin gave us years ago that is nice and loud without being obnoxious.  I explained to the kids when meals were ready I would ring the bell.


It works like a charm.  I love not yelling for the kids, or having to wander the whole house to assemble people for mealtimes.  We even have an outdoor version for summer: One of those big iron triangles like you see in cowboy movies hung by the back door.  Wherever the kids are playing within a block and a half radius they can hear us clanging on the dinner bell and come home.

Once in a while we ring the bell to gather the kids to us to simply tell them something, but most of the time they associate it with food.  The dog certainly does.  He's the first to arrive in the kitchen every time the bell sounds.

Most people are amused when they visit and the ringing of the bell is followed by immediate scrambling/thumping sounds from about the house.  The bell reliably ignites a tiny, hungry stampede.  Whichever kid happens to be downstairs already usually delights in being the one to get to ring the bell.  And honestly, I like having one fewer occasion to raise my voice.

So, I miss the bell.  Coming upstairs in the morning and simply telling people breakfast is on seems weirdly inefficient and less official.  (Now if I could just fix the bell so that it also makes the meals...)

Posted by Korinthia at 7:55 AM