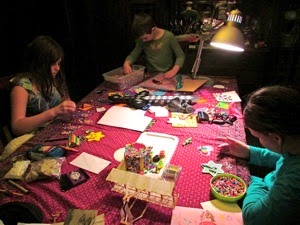 Our dining room table is usually covered in projects.  We sort through it all periodically when we have guests coming and need the dining table for, you know, dining, but most of the time it's more of a mail sorting station and an art project area. 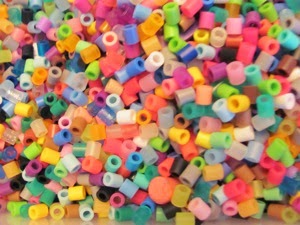 For the past couple of months it's been dominated by perler beads.  I know I've written about them before, but for anyone who doesn't know what I'm talking about, perler beads are little plastic cylinders that you organize on a pegboard, then iron to melt them together to form a single, flat, plastic piece.  Normally people make junky little things with them that nobody knows what to do with (I have some set aside for coasters), and the loose tiny beads get all over and are unpleasant to step on in bare feet. 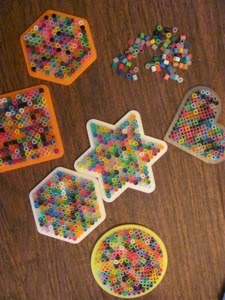 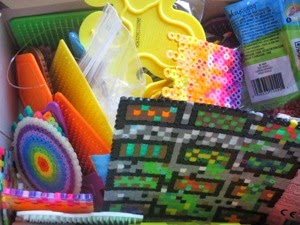 My kids started off like everyone else making basic shapes such as hearts or circles, sometimes in patterns, sometimes with random colors.  But then they decided to start using the plastic shapes they created as building blocks for larger things, piecing them together into walls of small structures.  They create accessories for use with other toys like hover-boards or food or things from Minecraft.  Quinn even made all his Valentines out of perler beads for his class this year. 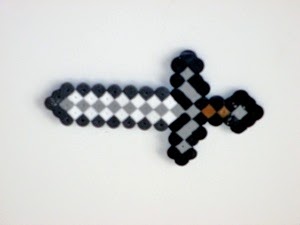 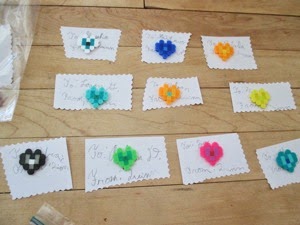 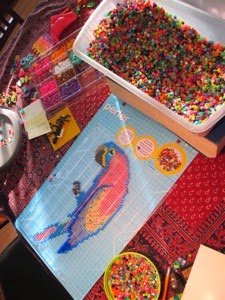 Then we stumbled across the "big board."  The craft store had a large, clear plastic pegboard that you could place on top of a picture to use as a pattern to follow.  The sample picture under it was a macaw.  My kids just stood in the store staring at the board and the macaw and I could see all the gears turning in their heads as they sorted through the possibilities.  Of course we bought the board.

Aden proceeded to do a slight variation of the macaw that came with the board.  I learned the hard way how to iron it without destroying the whole thing.  All the kids were excited by the results, and Mona went next with her own variations on the bird.

Then Quinn dug around in some old (and I mean OLD from when I was a kid old) Ranger Rick magazines and found a toucan photo to put under the board.  Now the kids have moved on to using the big board in a free form sort of way with nothing under it to copy.  Many of these creations end up perched on things on the walls of the kids' rooms. 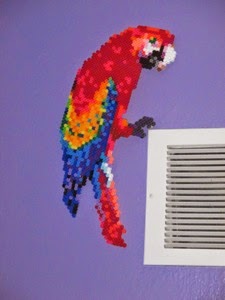 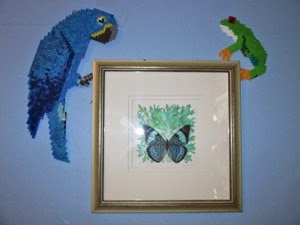 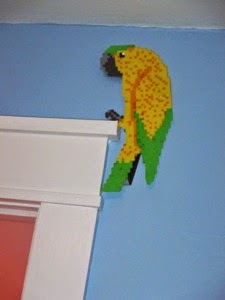 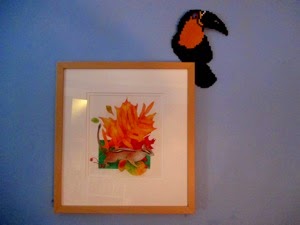 It's interesting to me to watch the kids work in their own ways.  Quinn is methodical.  Aden is particular but efficient when she's motivated.  Mona manages several projects at once.  Last time it was Mona's turn with the big board she invented a bird.  She also did a butterfly on a special pegboard, and decided to make an airplane that I thought was pretty nice.  (If I remember correctly, the yellow circles were going to be eventually hot glued in a stack to make a cupcake, but I don't know if that's still a plan.) 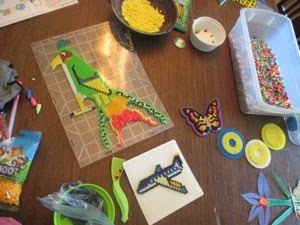 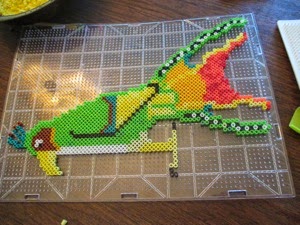 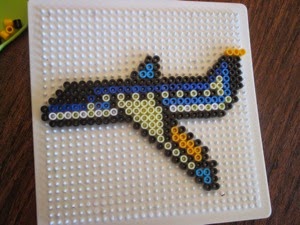 We've ended up buying lots of perler beads online in specific colors in order for the kids to fulfill their visions.  My kids don't ask for much, but I often remind them that I seldom say no to requests for books or art supplies, and I'm glad when they take me up on such offers.  We've also picked up some perler bead accessories from the craft store, including this little clean up thingy (that makes getting loose perler beads off the table and floor more fun).... 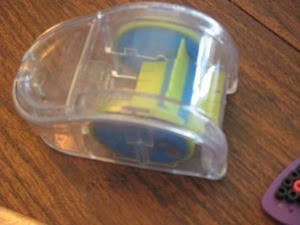 ...and a combination scoop and tweezer tool that I don't see much point to, but it was cheap and all the kids seem to be delighted with it and often sing its praises. 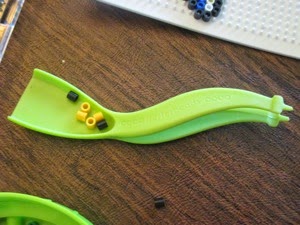 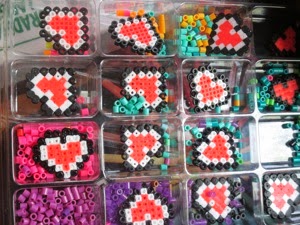 I don't know how long this perler bead phase will last.  The crafts my kids are interested in seem to go in cycles.  There was lots of perler bead stuff for a while, then they moved on to other projects like rainbow loom creations, then modeling clay, and now the perler beads are back again.  I think by the time Aden finishes her cockatoo we might be able to box up all the beads for a while.  (My bare feet hope so, anyway.)

I like the projects.  It may seem messy or inconvenient at times to have three kids' worth of materials spread out over a room or two, but with the things they create I get tangible souvenirs of their different childhood phases.  So much of what they do or say happens in the same kinds of cycles as they grow and there is nothing to hold onto.

For a long time Mona used to start sentences with "whelp" (instead of "well") and it made me laugh every time, and then one day, unceremoniously, that was over, and we didn't even know.  There were unusual clothing phases, and different movements or habits....  And they all just drift off as new things take their places.  I can't even begin to remember it all anymore.  But when I look at one of Mona's unusual water color paintings from when she was two, or wear one of Aden's necklaces to a concert, or even knock over yet another stack of Quinn's perler bead hearts, I'm there again for a moment.  Watching them work while probably fussing about the mess, but standing nearby while they were smaller.

I miss them from then; I adore them now.  One day we will be done with the perler beads for good and I won't even know when it happens for the last time.  But I'll still have some hearts to hang onto as a reminder.  (And probably some birds.) 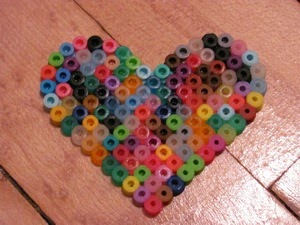 Posted by Korinthia at 8:23 AM