My dad just moved into in-house rehab.  This is good news.  He needed to fit into a very narrow band of criteria in order to qualify for it; too weak, not a candidate, too strong, they can’t take him either.  He’s just the right amount of upright but wobbly to qualify.  This will give him a chance to gain some strength while buying us some time to prepare for him coming home, so we’re happy.

In the meantime, I’ve had many long days to contemplate things about the hospital.  I think my biggest complaint would be that there is no organized system of making sure the different specialists can talk to the family.  It’s very hit or miss.  Out of 12 hours by my dad’s side yesterday, the 20 minutes I left to walk around and get some feeling back in my legs was the same time a flurry of doctors came through to provide an update.  I love my dad, but he is not a reliable source for relaying medical information, so we have no idea what the doctors said.  I know the medical people visiting his room have charts to refer to, to keep them up to speed, but there should be a layperson’s version.  A single page report at the end of the day listing the doctors who visited and what they had to say, along with times of blood draws and what medicines were administered or any tests that were done along with their results, etc.  How hard could that be?  Boy that would be helpful.

Also, the food service seems to have no connection to the doctors’ orders.  We kept receiving trays of food for my dad filled with things he wasn’t allowed to eat.  Why isn’t the hospital menu divided clearly into categories, like ‘liquid diet’ and ‘soft diet,’ etc.?  My dad is easing his way back into eating real food and the kitchen sent up potato chips.  We had to argue with him about how they were too much for his system and confiscate the bag like he was a kid, but they never should have sent it up in the first place.


On a less medically related note, I’ve also had time during my average 12 hour shifts at the hospital to explore the gift shop, parking lot, and cafeteria here.  And there are some things we just don’t understand.  These are my hospital mysteries.

There is a dramatic staircase to nowhere that I don’t get.

The cafeteria appears to be filled with food, but there is not much to eat.  There aren’t many places to go to get a break from the hospital room, so we end up in the cafeteria a lot.  I think I’m hungry until I get there.  And then I look at each thing and think, “Nah.”  Arno ended up with a tray of cottage cheese, beets, yogurt and a banana.  He says his only regret is he didn’t put more beets on the cottage cheese.  Although, to be fair, that didn’t look that different from meals I’ve seen Arno assemble by choice, so hard to judge.  But I paid almost five dollars for a sad little turkey burger which I ate while walking around and then was bored again.  But I keep looking at all the food and wondering why there’s nothing to eat.

But here is the real mystery in the cafeteria:  The “multi-purpose spoons.” 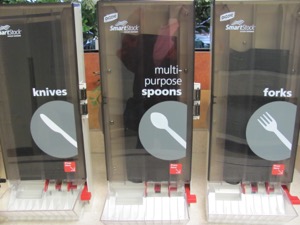 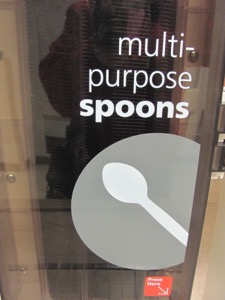 Apparently the knives and forks can only serve a single purpose, but spoons are multi-functional.  In my opinion this merely shows a lack of imagination on the part of people labeling the knives and forks, but still, it’s intriguing.  (If you are bored out of your mind and paying your third trip of the day to the cafeteria because it is the only place to go.)
In any case, my dad is looking more like himself, and soon my brother, Barrett, will be here to assist for awhile and I can head home to Milwaukee.  I’m glad I’ve been able to help here, but I miss Ian and the kids, and I’m sure there is a lot of work waiting for me at the violin store.  But maybe I’ll get caught up sooner than expected now that I know I can count on the versatility of all the spoons I have lying around.

I’m looking forward to being home–no mystery there.
Posted by Korinthia at 3:46 AM