The Other Work/Life Balance (Babble)

I am fortunate that my life has played out in such a way that I’m able to work and still be with my kids.  Owning my own business provides me with some needed flexibility, and although some days it plays out better than others, I don’t experience any guilt about working and parenting at the same time.  That part of my life is fine.  It’s the other work/life balancing act that I struggle with on a daily basis.  The one that has nothing to do with having a paid job.

The balance I’m talking about is the one between the work of keeping on top of basic responsibilities, and appreciating the joy that can exist in every moment.  I would like to be the kind of person who can make those things coexist effortlessly, but I’m just not that good.  I try.  I make a point whenever I’m putting a shopping cart in the little parking lot corral to remember how lucky I am to be able to walk.  Even when it’s rainy or cold, that’s a moment when I think about how much I know my grandma liked being able to take herself to the store, or even how other people in my own community can’t afford food.  I’m consistent with those short bursts of gratitude.

But operating as a single parent is hard.  It just is.  And I feel there are days when I have to march ahead, grim-faced and focued, because I can’t afford distractions.  I keep a lot of lists and I have many things to juggle, and it’s all on me.  There is no one to take up the slack or give me a break or catch anything I might have missed.  And there is so much of it that I am in perpetual fear that I’ve forgotten a field trip or missed an appointment or neglected to pay something.

Now, most of the time I do fine.  And there are people who find ways to help, but I’m not entitled to it and I can’t assume it will be there at the right moments.  I have to be the one my kids count on.  I try not to worry about people passing judgment when I unwittingly send Mona to school in shoes with giant holes in them, or I haven’t had time to read and initial all of Aden’s school assignments.  I’m doing the best I can but some things slip past me.  I can forgive myself for that.

But the days where I feel I’ve failed are when I lose it over something unimportant.  A lot of that is ‘the last straw’ effect.  It’s not that the kid spilling the juice was worth yelling about, it was the endless unheeded warnings about not putting the juice so close to the edge of the table after I just washed the floor again and this is the last of the juice and there is no time to clean it up but now I have to and we’re going to be late and I hate my life at this moment and now I feel guilty kind of stuff that goes with it.  It’s never just the spilled juice.  And I have many more of those last straw moments when I’m already carrying all the straw.  I miss being able to laugh off the stress of my day with my husband and start fresh the next morning.  When he’s away, most of the time I just carry that stress with me into the next day.  And my fuse gets shorter.

And I end up with mornings like Thursday.  Thursday it snowed and snowed and snowed.  Enough to cancel everything in Milwaukee but the public schools, so I got up and made French toast and put in a load of laundry and started nagging the girls to get dressed.  They don’t listen.  We’ve had discussions that are calm, loud, tearful, and silly, where I’ve even been down on my knees begging about how they need to do what I ask when I ask them.  I don’t have time to repeat myself.  I don’t ask much of them and I resent it when I have to say something more than twice.  I hate that they don’t move sometimes until I yell, and every time I yell I ask them why they let it get to that point.  In any case, I refrained from yelling and asked them at least a dozen times to get dressed before they finally got their clothes on and went to breakfast.  I tried getting through some work emails and bills but kept getting interrupted with various breakfast related requests.  Aden didn’t want to do her eyedrops.  Quinn never stops singing or talking, which is sweet unless you want to think about anything.  Mona had left her snow pants in the car and I had to send slow-poke Aden out to get them.  Quinn can’t put on his own coat.  Aden’s backpack was broken and I had to rummage around for safety pins.  I never did brush anyone’s hair.

So my last straw moment that morning was that after a rocky start to the day and running a good ten minutes behind (despite my getting up two hours before we had to leave), I sent all the kids to get in the car while I gathered my own things to take to work.  All I wanted was for them to be in the minivan and buckled.  But I asked nicely instead of yelling, so when I stepped out the back door they were all playing in the snow.  Aden was on the swingset kicking snow drifts with her boots, Quinn was shuffling in circles, and Mona was flat on her back making snow angels.  I’d had enough and shrieked a little before I burst into tears.  They all looked apologetic and ran into the garage and buckled up as fast as they could.

So here’s the thing:  I love that they wanted to play in the snow.  They should have a chance to play in the snow.  In the grand scheme of things being late to school doesn’t matter at all.  But when does it, then?  I get frustrated because I have to run such a tight ship just to keep the ship afloat that I don’t get to stop and admire the sea.

I’ve always had trouble with the attitude that you should live each day as if it were your last, because if I knew today were my last I would not do the dishes.  And assuming I’m still here tomorrow, I don’t want to face that day with a mess of dishes in the sink.  It’s the same with spending time with my kids.  If I knew today were our last day together, we’d skip school to make snow angels, eat ice cream for dinner and go to sleep in a pile on the floor of all the pillows and blankets in the house, giggling and snuggling in the dark.

But if I have to get them to school the next day, I don’t want to do that.  To be ready for tomorrow I need them to eat well and do their homework and get enough rest.  I like to feel prepared.  I suppose I see the forest and wish I had more time for individual trees.
The days I’m most proud of myself are the ones where I do find a balance between what has to get done and what is really important.  When the kids help me make quiche by cracking the eggs and grating the cheese that makes me happy.  When Quinn holds my hand in line at the post office, that makes me happy.  When I accept I can’t change the fact that we are running late and we decide to sing on the drive instead of fret, that makes me happy too.  Some days that comes more naturally than others.  And some days are just hard.

I don’t expect that it’s possible to be appreciative of my life and my health and my good fortune every minute.  But I do suspect I could do a better job of it during some of the drudgery that threatens to consume too many of my hours on this earth.  I want to somehow keep things running smoothly while finding space to loosen up a bit.  I want to learn to let the snow angels fly where they may. 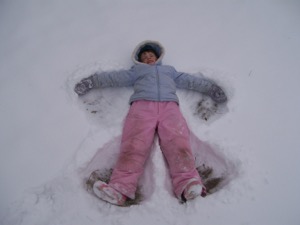 (Mona my snow angel)
Posted by Korinthia at 1:10 PM