People talk about feeling busy during the holidays.  We think of it as birthday season.  In the span of six weeks we have Quinn’s birthday, Thanksgiving, Mona’s birthday, Aden’s birthday, Christmas, my brothers’ birthday and New Year’s.  Somewhere a week into January I’m finally able to take a deep breath, but until then I’m running.  I don’t even think about Christmas decorations until well past the middle of December.

So right now we’re just heading toward the hump of birthday season.   Quinn’s birthday was low key and fun.  He had a chocolate cake with lots of purple frosting and a candle in the shape of a ‘7.’  (My kids almost never pick the candle that has anything to do with the age they are going to be, so it’s a good thing I date our photos because trying to deduce anything in the future from pictures of the cakes would be difficult to say the least.)  He got some nice presents from his grandparents, and Aden read him all his birthday cards out loud. 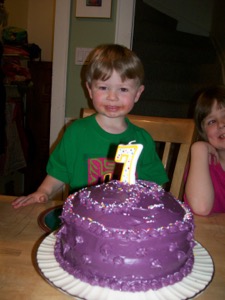 Thanksgiving was wonderful.  We ate too much and enjoyed nice company, just the way it should be.  Mona had the best line at dinner.  After showing her all the available food the only thing she liked enough to put on her plate was a bit of turkey.  So when we were all seated at the table and my neighbor raised her glass and said, “A toast!” Mona perked up and said, “I’d like some toast!”  It was great having Ian home, even for such a short visit.  It’s amazing how time can feel erased in certain circumstances.  As soon as he was in the house again it just felt right and normal and as if he hadn’t left us back in September.  All those nights of going to bed without him felt like a dim memory.  I have to take him to the airport tomorrow morning.  I don’t want him to go.

Coming up soon is Mona’s birthday, and she’s been begging since last year to have a party at Chuck E. Cheese’s.  I relented, primarily because the idea of only cleaning up the house for one party instead of two appealed to me.  Chuck E. Cheese’s is only a few blocks from our house so we can just walk there.   The place gives me a headache, but it makes the kids really happy.  Aden is currently the perfect age to enjoy it because she’s just old enough to apply some skill to the games and develop a strategy for getting as many tickets as possible, and just young enough to think all the cheap prizes she gets for those tickets are fabulous.  I’m already looking forward to leaving that party.

Aden will be turning eight the week after Mona’s birthday, and her party theme this year is ‘dancing to records.’  I showed Aden last year how to use our record player and she’s crazy about it.  She plays Peter Gabriel and Hermans Hermits and her favorite thing is the B side to a Soft Cell 45 that I got back when Harmony House sold vinyl.  I remember how much fun I always had using my record player as a kid and messing with the different speeds, so I broke out some of my old LPs one afternoon and taught Aden the fine art of dropping the needle down between songs.  She’s been enamored of it ever since, despite being limited to the music her dad and I thought was cool back in high school, and whatever my dad brings her when he visits.  I’m still not sure how to structure her party so that the other kids have fun, because Aden has some idea in her head about a dance contest with some pretty specific (and somewhat annoying) sounding rules, but I’m sure it will work out.  I’m trying to find a mirror ball and we may make some kind of sash for the dance contest winner.  Not sure yet.  But she does want a rectangular cake with the music to Happy Birthday written out, and that I can handle.  (I asked her if I could just make a round cake that looked like a record, but for some reason that didn’t fly.)

After the dust settles from Aden’s party I’ll start to panic about Christmas presents for everyone.  My mom has often mentioned around this time of year how inconvenient my “planning” has been, that all the birthday and Christmas presents have to come about the same time for all my kids.  It is an awful lot of present overload, but after a childhood spent watching my poor brothers share a birthday a few days after Christmas, I am determined to keep my kids’ birthdays a distinct event from the other big gift giving day.  (There were few things that seemed more unjust as a child than a single box labeled “Happy Birthday and Merry Christmas to Arno and Barrett.”)  The nice thing for us about Christmas is that (aside from my parents) everyone comes right after the actual day.

There have been years I got our tree for free because I didn’t need it until the 24th.  We get to spread out the fun from Christmas Eve all the way through New Year’s Day, with a big family party for my brothers in between.  Milwaukee is not the most accessible place for my relatives to gather, but the up side of my “planning” is that no one felt I should have to travel with a newborn in December.  Everyone’s in a habit of coming to us now, and no one seems to have noticed yet that the newborns are all walking, talking, potty trained people.  (I love having everyone here, so don’t tell anyone we could travel now, okay?)

But the best gift this season is that Ian may get to come home again one more time before he ships out to Iraq.  Nothing is ever certain with the Army, so I’m not banking on it, but the chances are good.   As I type this, he’s downstairs playing with the kids for the last hour or so before bedtime.  It’s a comforting thing, just knowing he’s down there having fun with them.  When they wake up tomorrow I’ll have already taken him to the airport, and we’ll go back to life without daddy for awhile.  With a little luck, by next birthday season he can help me with the pizza and the cake and the dancing and whatever else the kids come up with to keep life festive this time of year.  Definitely something to look forward to.
Posted by Korinthia at 3:00 PM