I feel fortunate that there are several objects from my childhood that I have been able to pass along to my kids.  There’s something wonderful about being able to read Goodnight Moon to them from the copy I held as a child.  They have many of my old books, some old toys, a bit of jewelry….  But my favorite plaything from back in the day is the pachinko machine.

I don’t know how many people are familiar with what that is, but it’s sort of a Japanese pinball game.  Ours is a model from the early 1970’s and it looks like this: 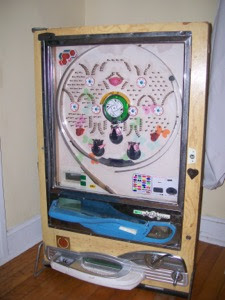 I love the thing.  I’m particularly attracted to the sounds it makes.  There is a very satisfying ‘plinkita plink plinky plink’ as the metal ball bounces down along all the pins.  There’s also a nice ‘shwoosh’ as you launch the balls.  When you get a ball into any of the flowers or the jackpot wheel in the center you win more balls, and they run over a bell on the way into your tray.

The other cool thing about the pachinko machine is it’s completely mechanical.  It doesn’t plug into anything so you can stick it anywhere, and there is something fun about watching kids gather around it instead of a video game.  Pachinko is so low tech compared to most of what my kids’ friends have available.  It’s simple and vaguely hypnotic, and it has anachronistic touches like an ashtray built into it.

My mom got it as a gift from her brother John when we were little, and my brothers and I spent a lot of time playing it, jamming it, opening it up, and jerry-rigging it to go again.  When Ian and I bought our house almost ten years ago I asked mom if I could have it since it was just gathering dust in the basement.  My mom’s always looking to clear space in the basement and was fine with my taking it off her hands.  I played it a little, jammed it, fixed it….

Then I had Aden and put it up high where little hands wouldn’t find little balls to put in her little mouth.  When Aden and Mona were each old enough we’d let them stand on a chair to play it, and eventually we brought it down to the floor so they could share it with their friends.  By the time we had Quinn the girls had jammed it and whacked it too hard for me to fix anymore.  I didn’t have the time or parts to effectively deal with it.  It sat collecting photos and post-it notes on the front of it like a small, broken refrigerator.

But the internet is a magical thing.  I can’t imagine trying to live without it anymore.  It saved me on more than one occasion during Ian’s last deployment because it was so hard to get out while pregnant and carting around little kids.  To be able to open my laptop and have the world there was amazing.  If in the middle of the night Aden wanted to know what a turkey vulture sounded like (they have no vocal chords–not pretty) we could Google it and instantly find out.  If I wanted a particular book I could order it.  Netflix kept me supplied with movies to watch during late nights up with the newborn.  I found a contractor to do work on the basement online, and a doula on Craigslist, and I could have gifts sent to friends that I couldn’t get out and see.  Obscure music and peculiar toys and even our treadmill I ordered online.  With a little practice you can find almost anything.  Including pachinko repair people.

There is a nice couple down in Texas who have a sideline of repairing vintage pachinko machines like mine.  I shipped it to them, they fixed it, restocked the supply of balls, and now it works beautifully.  They even repaired the wiring so with a nine volt battery installed it lights up when you get a jackpot.  I’d never seen it with the lights working before, so now it seems new even to me.  When I was a kid it would have been impossible to track down a pachinko repair person, especially if you had to look as far away as Texas.  I love that with a few taps on my keyboard I could know in a matter of minutes whom to ask.

So now I sit with my kids on the dining room floor and we shwoosh and plinkita plink plinky plink and Quinn says things like, “So close!” and “I got it in that flower, mom!” and Aden reminds them all to take turns and Mona still manages to jam it up occasionally, but it’s an easier fix now that everything has all its proper parts.  In those moments at the pachinko machine with Aden, Mona, and Quinn, I don’t just get to experience things through my kids’ eyes, I get to have kid’s eyes of my own again.  It was worth the cost of shipping to Texas.
Posted by Korinthia at 10:40 PM

Email ThisBlogThis!Share to TwitterShare to FacebookShare to Pinterest
Labels: pachinko