School starts for my kids the day after Labor Day this year.  They are going into fifth, third, and K5, which means for the first time all of them will be in school until 2:20 each day.  Full day school for all three kids.  Part of me is feeling sort of shocked and sad that all of my babies are now for sure definitely not babies anymore and haven't been for a long time.  But the other part of me is all in a happy dance about how bright and fun and independent they are and that they will all be in FULL DAY SCHOOL!  It's like a having a wish granted by the Time Fairy.

Anyway, I asked the kids what they wanted to do with their last weekend of summer vacation.  Was there anything we hadn't done that they had hoped to do?  They thought about it, and decided they had done it all.


Now, I didn't remind them of the things on the list we came up with at the beginning of the summer that we didn't get to, such as organizing a scavenger hunt race for the neighborhood kids or throwing a tropical themed party (my having to work kind of got in the way of those plans happening), and I had kind of hoped this would be the summer I took them to some of the fun things to do in Chicago, so the Sears Tower and the Museum of Science and Industry will have to wait until later.  And my kids pointed out that for some reason this year there were no ice cream trucks.  Our neighborhood used to be lousy with ice cream trucks, but this summer there was only the occasional paleta cart, and they don't play The Entertainer or offer strawberry shortcake bars so it's not the same.  The lack of ice cream trucks, however, was merely an observation and not a real complaint.

But we did do a lot!  We made it out to the Public Museum and Discovery World and the Zoo and Incrediroll.  They've played on the beach, had fun on playgrounds, climbed trees, dug holes, learned new games, caught fish, held frogs, swum, baked cookies, run, biked, scootered, seen most of our relatives, put on a puppet show, built things, decorated other things, attended parades, planted flowers, ridden horses, watched fireworks, been to concerts, caught fireflies, hula-hooped, trampolined, washed cars, stayed up too late watching movies or listening to me read books, sung, and laughed.  It really doesn't get much better than that.  Plus there were no medical moments beyond an occasional splinter, scraped knee, or allergic sneezing fit.

The few weeks before school begins we tend to run a little home school in the mornings.  Our kids ask us for review, worried that they may have forgotten things they should know and they don't want to be embarrassed when they go back to class.  We have a white board propped up in front of the fireplace in the living room, and they love having one on one time with me or their dad and an excuse to write things in different colors.  A lot of times I'll just ask my kids to write down a silly sentence I come up with, and then I check their cursive or correct spelling errors, and somehow it winds up being more fun than chore.  Quinn wanted to do his times tables and started division.  Mona wanted help with spelling.  Aden needed general help with writing and punctuation.

By the time I got to Aden's turn the other night I needed to get to some things in the kitchen, and I asked her to simply write several sentences in her own words (preferably ones that she was unsure of how to spell) about our summer and to call me in when she'd filled the board.

When she was ready I came out and read her work, and it was one of those rare moments where as a mother I felt like I'm doing things right.  In orange dry-erase marker was neat, cursive writing about how this was the Best Summer Ever.  She'd played with her cousin and cooked with her grandma and spent time doing both nothing and everything at the cottage built by her late great-grandparents.  I got a little teary and hugged my first baby who now comes up to my chin.  Then I told her 'went' doesn't have an 'h' in it.

I often think about what kinds of memories my kids will have of their childhoods.  Ultimately we don't have control over which moments will be decisive for them, which ones they will remember or will shape them into the adults they become.  All I can do is try to create an environment where they feel safe and loved enough to enjoy being who they are.  I don't know what the future will bring, but I can at least say that Summer of 2012 was for our family exactly what I think a child's summer should be.  I hope it's a memory my kids can hold onto forever. 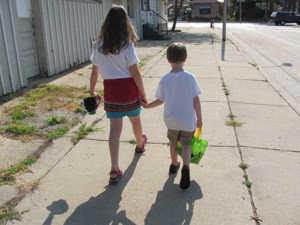 Posted by Korinthia at 1:57 PM