I take a lot of pictures of my kids.  Babies grow so fast and kids change so quickly that it’s easy to forget nearly everything.  By grabbing moments here and there with my camera I feel like I get to hang onto certain stages a little longer, and keep them fresher in my mind later when they are long past.

I’m particularly careful to get lots of pictures of all three of my kids because I have heard way too many stories from people who either never took pictures of their youngest child, or who were that youngest child and have no pictures of themselves growing up.  It’s completely understandable and I cast no judgment on any parent for whom keeping photographic records of their kids is not a priority, but for me it is.  I don’t have the dedication for full out scrap-booking, but I do keep clearly labeled albums for each child so any of them can see what they looked like at any particular age.  We have a lot of fun once in awhile pulling out albums and seeing just how much Aden and Quinn looked alike as babies, or how funny Mona was at two.

I’ve gotten a lot of practice with these particular subjects, so I’m pretty good at catching them at a good moment.  Having a digital camera helps because you can take so many photos it’s hard not to find a nice one.  But lately I’m fighting the battle of The Cute Face (emphasis on the word ‘Cute’).  It’s a Mona thing.

This is the official Cute Face: 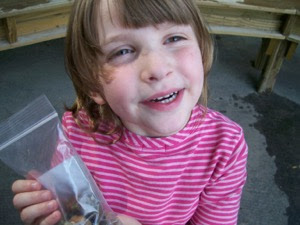 We’ve been living with The Cute Face for a couple of months now.  It appears every time I pull out my camera or the video recorder.  I’m not sure what sort of insipid Japanese cartoon figure it could be based on, but it has invaded all our recent family photos. 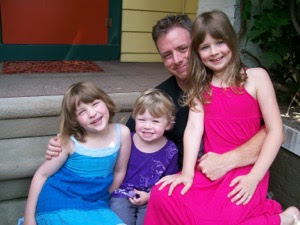 We’ve all had to accept it as a new fact of life.  Aden, as she was watching me look through pictures for this post, kept saying, “There’s Mona’s Cute Face. Oh, and there’s The Cute Face again….” Quinn tries to tell my customers at the violin store about The Cute Face, but even though he speaks clearly they can’t imagine what he’s talking about and they dismiss it as typical toddler ramblings.  Mona herself dubbed it The Cute Face.  She asked if I wanted to see it one afternoon and it has remained with us ever since.  She practices lots of faces in the mirror and can simulate everything from ‘confusion’ to ‘surprise’ to ‘anger’ on command if she’s in the mood to pose for you.  Lately she’s a one trick Cute Face pony.
Back at the beginning of summer the bigger issue with photographing Mona was the forced smile.  That’s a common one among children who are photographed so regularly they know the routine and decide simply baring some teeth and pointing them at the camera will finish the chore so they can get back to what they were doing.  The forced smile has a weird appeal for me, though.  There’s an earnestness in it that doesn’t bother me.  And Mona’s forced smile makes me laugh. 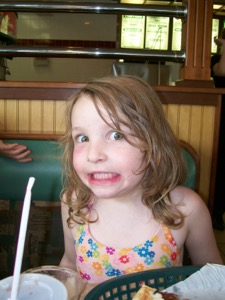 But check out Mona when she doesn’t know the camera is on: 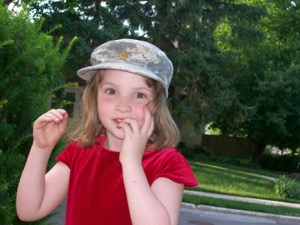 Or when she’s being intense: 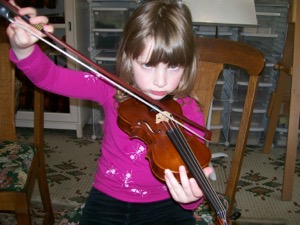 Those are the kinds of shots that make me glad I keep fresh batteries in my camera.
About a year after Mona was born, I got a form letter from an ad agency down in Chicago.  It explained that since baby models grew so quickly they are always looking for new ones, and would we like to bring our precious bundle of joy down to the windy city to be evaluated for modeling potential?  Strangers were always commenting on how cute my kids were, and the idea of getting some money in their college funds while simply getting professional photos of them seemed appealing.  Ian agreed it was a harmless day trip, so we made an appointment and took the girls down there.

It was interesting.  I still haven’t decided if it was legitimate, or some elaborate scam taking advantage of vulnerable new parents, but it’s always fascinating to have someone else take a critical look at your own kids.  Of course each of us thinks our children are amazing and beautiful.  We SHOULD think that.  And honestly, I believe it’s true.  (But that’s for another post.  Back to the Cute Face….)

The man at the agency was at first rather disappointed.  He glanced at my girls and asked if I wanted the truth.  Apparently the truth was that Aden’s hair was unacceptable.  Too thin.  Too limp.  But then he decided to continue to run her through the whole evaluation process because we had so much appointment time left, and he became very animated about Aden.  He took her aside for an interview, and for being only three she was remarkably articulate.  Aden was good with language very early and has no trouble expressing herself.  The interviewer couldn’t get over how specific she was with her answers and how pretty her face was when she talked.  Between her dimples and her blue eyes she was looking less unacceptable despite her thin, limp honey blonde locks.   He thought there just might be some use for her in commercials.

But Mona?  The verdict on her one-year-old sweet self was:  Too big.  Too bald.

Ian and I took the girls out for lunch at a nearby restaurant after that.  We had cake from a revolving dessert display that Aden was thrilled about.  It was a memorable morning, and one that made me appreciate how well I see my children.  I know people think parents are too biased to see their own children objectively and that somehow diminishes their assesment of them.  I disagree.  I think by studying your children often and closely you can see them better than anyone else.  I’ve watched the evolution of those smiles from toothless to toothy to working on toothless again.  I see their brief but endearing histories in their movements and their moods.  I do think I see my children clearly.  And they are more beautiful than anyone realizes.

So when other people tell me on the playground that Mona is beautiful, I agree, and I smile to myself and think,”Too bad she’s so big and bald.”

I’m sure The Cute Face will be retired soon in favor of some new Mona phase.  I’m looking forward to fondly missing it.
Posted by Korinthia at 11:20 PM